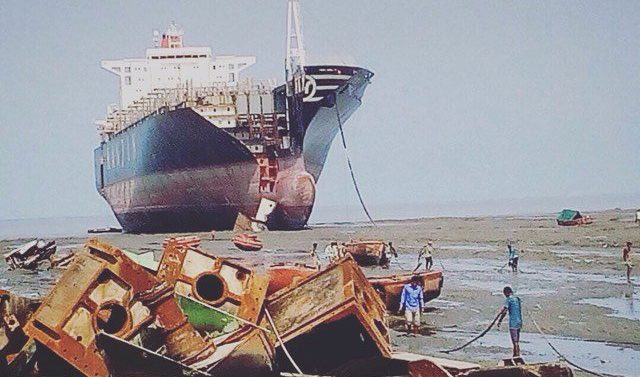 Above image is used for illustration purposes only / Credit: NGO Shipbreaking Platform/twitter

Toxic Watch Alliance, an environmental NGO, has pointed out the indifference of the Narendra Modi-led government in looking the other way as end-of-life ships from other countries, many of them carrying banned toxic and other hazardous substances, continue to be dismantled in the ship-breaking yards of Alang in Gujarat, India. Consequently, Dereo O'Brien, the Chairman of the Parliamentary Standing Committee on Transport, Tourism and Culture, sent a letter to Trinamool Congress MP in Rajya Sabha.

The letter was sent occasioned by a Dutch shipowner who had been penalised in the EU for beaching an end-of-life vessel for scrapping in India, and therefore, remains unpunished by Indian authorities.

He continued stating that the beached ship was sent to India, despite the denial of the Supreme Court order in 2012, as well as the Basel Convention.

Dr Gopal Krishna from Toxic Watch, supported that the concerned of agencies of Gujarat Government have been indifferent to the notices by Union Ministry of Shipping with regard to environmental and occupational health issues concerning ship breaking industry for quite a long time although India is a signatory to the Convention.

He also added that the owner of the ship, Holland Maas Scheepvaart Beheer II BV, has paid a settlement of 2.2 million euros in penalties and fines, which is equal to the amount the owner earned when he sold the vessel, whereas the overall fine reaches the  7.80.000 euros.

Moreover, in 2013 the ship owner sold the vessel to a company-expertise in the trade of end-of-life vessels to beaching yards.

In addition to the accusations, the Dutch public prosecutor involved stated that the vessel was so damaged that opposed a great threat to the environment, the workers' health and to the local population as well.

Scrapping vessels on tidal mudflats is prohibited in European grounds, and the export of hazardous materials from the EU to developing countries is prohibited.

Concluding, according to a 2015-report, 68% of the end-of-lifer ships Europe sends annually end up in India, along with 90% of them being dismantled in Alang's shipyards.