One Earth Future and Stable Seas launched the 2018 State of Maritime Piracy, focusing on the human cost of maritime piracy. The report has expanded its attention from just piracy in Somalia, to the Gulf of Guinea, Southeast Asia, and Latin America and the Caribbean.

Specifically, the report aims to explain and quantify the magnitude of these crimes and the profound impact they have not only in the shipping industry, but most importantly in the victims.

The key findings of the report are: 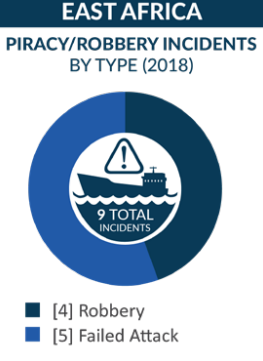 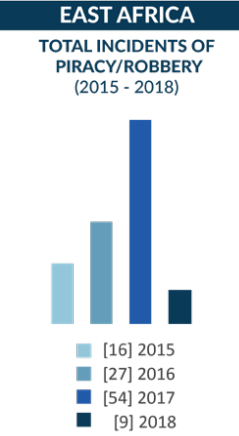 More specifically, the report provides additional information in piracy incidents in East Africa. The incidents were 9 during 2018, in comparison to 2017 which were 54.

Meanwhile, the piracy incidents for 2018 consisted of 4 robberies and 5 failed attacks.

The root causes for piracy off Somalia—the poor socioeconomic situation and political instability in the country—are still present. This latent potential for piracy brought about by coastal violence, weak economic conditions, and the prevalence of crime networks was explored in detail in a 2017 report by One Earth Future 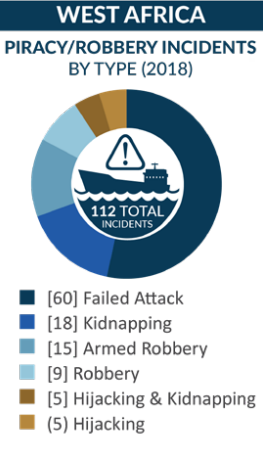 In addition, concerning West Africa, the total incidents for 2018 were 112, and consisted of failed attack, kidnapping, armed robberies,
robberies, hijacking and kidnapping and just hijacking. 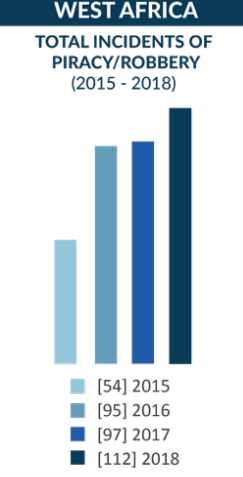 According to the report, in 2018, pirates in the Gulf of Guinea extended their range of attacks in the region, making attacks highly unpredictable. 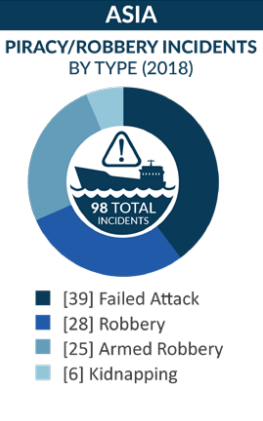 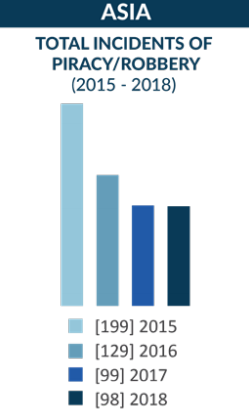 he piracy incidents in Asia were 98 in 2018, and consisted of failed attacks, robbery, armed robbery and kidnapping.

Almost two-thirds of robbery incidents reported in Asia in 2018 occurred when vessels were at anchor. Almost a third of these were at two locations: Muara Berau Anchorage, Samarinda, Indonesia; and Chittagong/Kutubdia Anchorages, Bangladesh.

In 2018, 61 crew members from six separate kidnapping incidents were held hostage in Asia. All of the victims were fishermen.

Two incidents took place off Sabah, Malaysia, and four in the Sundarbans, Bangladesh. The average time crew members were held hostage in the Philippines during kidnapping incidents from 2014 to 2018 was five months. Attackers were armed in 36 incidents. Weapons included iron rods, knives, machetes or long knives, and firearms, some of which were homemade. 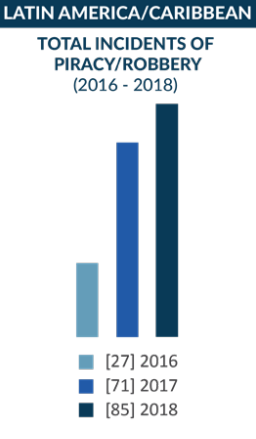 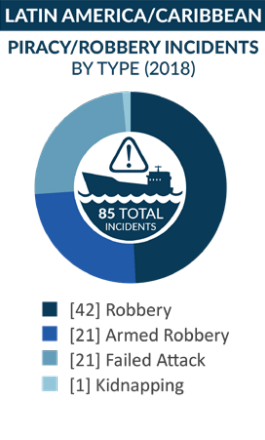 The report also pays close attention to piracy incidents conducted in Latin America and the Caribbean.

The report comments that while the overall number of incidents increased in Latin America and the Caribbean from 2017, this increase was primarily on vessels with smaller crews such as fishing vessels.

In 2018, 858 seafarers were affected by piracy and armed robbery in Latin America and the Caribbean—four more than in 2017. This indicates that the increased incidents were mainly on vessels with smaller crews such as fishing vessels, with incidents on fishing vessels increasing from three in 2017 to 15 in 2018.

For more information on the report, you may click on the PDF herebelow 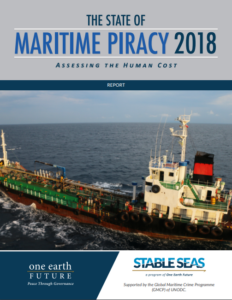