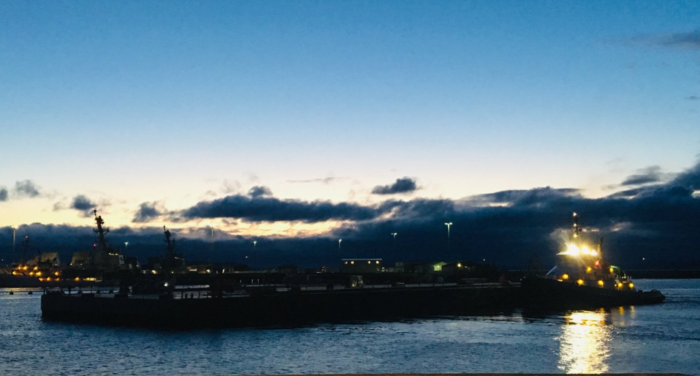 Foss Maritime's Michele Foss departed the Port of Everett on Wednesday, May 15, sailing to Port of Los Angeles to pick up two gantry cranes for use at the Port’s modernized South Terminal. The $57 million South Terminal Modernization project will ensure the Port’s facilities are ready to support the next generation of over-dimensional cargo, including aerospace parts for the new 777X. The two cranes are a critical piece in this loading and unloading efficiency.

The strengthening of the terminal was crucial, in order to be able to support 2,400 tonnes of cranes. The barge will take approximately seven days to arrive in the port of Los Angeles, ten days to load the two cranes, and another 7 days for them to arrive back in Everett.

The completion of this upgrade will add another full-service berth at the Port to accommodate project, bulk, breakbulk, high and heavy and containerized cargoes.

After being completed, the dock will be sufficient enough to accommodate two, 100-foot gauge rail-mounted container cranes and provide vaults for ships to plug into shorepower while at the dock.

Moreover, the cranes will be stored for maintenance and upgrades, and will begin operations after the South Terminal's modernization project is complete.

The Seaport Modernization was supported by dozens of businesses, educational institutions and public agencies in our region. It was also made possible by both of our U.S. Senators: the project received nearly $22 million in federal loans from the TIGER grant program established by Sen. Murray and FAST Lane grant program from Sen. Cantwell, as well as the Congestion Mitigation Air Quality (CMAQ) program.