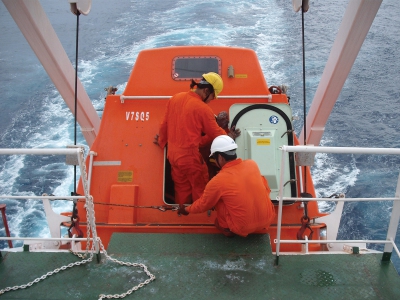 Widely known as the “seafarers’ bill of rights,” the MLC, 2006 was adopted by government, employer and workers representatives at a special ILO International Labour Conference in February 2006.It is unique in that it aims both to achieve decent work for seafarers and to secure economic interests through fair competition for quality ship owners.

The following are the latest ratifications of MLC 2006.

Germany has around 350 registered vesselstotallingmore than 15,3 million gross tonnage under its flag and is the third country of ownership in the world. The port of Hamburg, third largest seaport in Europe, 14th world’s largest container port and second largest European container port, is a major transportation and logistics hub for Northern Europe which provides access through its waterways to the European hinterland and plays a major role in the region’s economy, with more than 40 000 people employed directly in and around the port.

With the ratification by Ghana, 44 ILO Member States representing nearly 75 per cent of the world’s global shipping tonnage have now committed themselves to the decent work standards of the Convention.

Ghana has under its flagapproximately 226 registered vessels totalling 124,269 gross tons. The Ghana Maritime Authority (GMA) was presented this year with a Global Quality Achievement Award in the Gold Category by the European Society for Quality Research for quality improvement techniques, recognition and research, an achievement which aligns with the recently-established 17 million Euro vessel traffic and information systems facility. In addition, with aims to ensure the engagement and welfare of Ghanaian seafarers, and in support of the Government’s Youth Employment Programme, the GMA has initiated a Seafarer Employment Programme designed to promote the employment of Ghanaian seafarers onboard ships.

Lithuania is the45th ILO Member State to have its ratification registered and the 18th European Union member state to have ratified the MLC, 2006.

Lithuania has96 registered vessels totalling 407,000 gross tons under its flag. Its Klaipeda Port, a major ice-free port in the northernmost Europe, creates excellent transit possibilities between the East and the West. The capacities of Klaipeda Port to handle cargo have increased over the past years. It welcomes vessels from many world countries and makes Lithuania a crossroad of cargo flows.

The Lithuanian Maritime Academy (LMA), a state institution of higher education training for highly qualified seafarers and other specialists of the industry, actively participates in international and projects activities since 2000. It cooperates with maritime education and training (MET) institutions in Lithuania and other countries. Lithuania’s marine business is also characterized by its fishery industry, a sector that contributes significantly to the economic development of the Baltic region.

Belgium becomes the46th ILO Member State also becomes the 19th European Union member to have ratified this historic agreement which constitutes the fourth pillar of the international maritime legal regime, complementing the key Conventions of the International Maritime Organization (IMO) and providing decent working and living conditions for seafarers as well as conditions of fair competition for ship owners.

The port of Antwerp, fifteenth largest port in the world, the second largest European port and the first chemical port in Europe holds a strategic position in the “northern range” and has the largest port area of the world. Maritime platform of primary importance, the port of Antwerp has benefitted, over the past ten years, from significant investments in its port capacity that increased its influence and attractiveness while incorporating high environmental standards for sustainable development. These efforts have been acknowledged by several awards.

Belgium was already bound by 15 ILO maritime Conventions. In ratifying the Maritime Labour Convention (MLC 2006), Belgium reaffirms its willingness to commit to a level playing field in the maritime sector and promote a comprehensive set of rights and protection for seafarers.

Learn more in the MLC List of Ratifications in the ILO MLC dedicated portal.