Maritime insecurity poses problems in the Gulf of Guinea

In this report, Stable Seas explores Gulf of Guinea’s connections between maritime governance themes and security challenges, drawing on interviews conducted with experts and practitioners in seven countries across the region.

The combination of maritime insecurity and environmental degradation poses significant problems for the blue economy in the Gulf of Guinea.

According to the report, the failure of governments to incorporate the needs of the coastal communities can undermine the peace and stability of the state, as illustrated by the situations in the Niger Delta in Nigeria and Cabinda, Angola.

One of the most compelling challenges facing the Gulf of Guinea will be how to strike a balance between welfare improvements for coastal communities and sustainability as national economies mature.

The potential for the expansion of industries like maritime tourism, offshore oil and gas, maritime transport, and shipping to bring about an abrupt end to the fishing communities along the coast is a distinct and worrisome possibility.

The implementation of “blue projects” also poses a threat to land rights, as there is a risk that coastal communities will be expelled to make room for some of these projects.

Specifically, states across the Gulf of Guinea are refocusing policy to develop the blue economy. However, there is an urgent need for a clear institutional governance framework for growth which identifies the goals, partners, measurable indicators, and time frames for policy implementation and achievement at both the national and regional level.

In addition, harnessing the potential of the blue economy requires immediate attention on environmental. Another important fact is the degradation and improvements to maritime safety and security. Failure to address these issues could deprive countries in the region of the economic gains derivable from maritime industries such as fisheries and
tourism, oil and gas, and maritime transport and shipping, respectively.

Moreover, in order to sustain the benefits of the blue economy for the region, proper assessment of the opportunities, risks, and gains of investing in blue projects is vital; otherwise, countries in the region risk exacerbating the suffering of vulnerable communities.

Climate change is likely to affect the abundance, distribution, and assemblage of fish stocks on the African continent.

Climate change is evident in variations in ocean current patterns, nutrient inputs, and oxygen concentration, which often result in changes in ecosystem productivity.

African countries are most vulnerable to the impacts of climate change; moreover, West African fisheries sectors are expected to bear the brunt of warming climates. Warmer temperatures are expected to lead to a decline of 21% in the annual landed value of fish in West Africa and a decline of nearly 50 percent in fisheries-related employment by 2050.

If overexploitation of fisheries in the region continues at current rates, projections suggest marine-capture fisheries in Nigeria, Côte d’Ivoire, Ghana, Liberia, Sierra Leone, and Togo could halve by 2050.

The pervasiveness of illegal fishing in the gulf of guinea is in part due to inadequate legal frameworks which fall short of international obligations. Where legislation exists, legal gaps and weak.

What is more, weak political and economic bargaining power in most Gulf of Guinea countries has led to one-sided partnerships with distant-water fishing nations. The lack of state support for fisherfolks to find alternative sources of livelihood makes criminal activity, including IUU fishing, armed robbery at sea, illicit trades, and mixed maritime migration, more attractive to impoverished communities.

Nigeria remains at the epicenter of the current wave of piracy in the Gulf of Guinea. Criminality in the Niger Delta is spilling over to the greater region as pirate groups expand their area of operations. Criminals from other regional states are, however, also involved in kidnappings and hijackings and are responsible for robberies at anchorages in the region.

Owners and masters are advised to file reports with MDAT-GoG when entering the voluntary reporting area. The “Guidelines for Owners, Operators and Masters for Protection Against Piracy and Armed Robbery in the Gulf of Guinea Region”, to be read in conjunction with the “Global Counter-Piracy Guidance for Companies, Masters and Seafarers,” provides detailed advice to assist in risk assessment for masters of vessels transiting the area.

There are increased calls for greater cooperation with the international community in the Gulf of Guinea. This can take many different forms. One possibility is establishment of a transit corridor, group transit schemes, or national convoys where vessels travel in groups to increase safety; although costly, these could provide protection for merchant vessels in territorial waters and the high-risk area in the Gulf of Guinea. This will require building the capacity of navies in the region as well as international partnerships.

Unemployment of youth in the maritime industry will need to be addressed as these individuals could be recruited into pirate groups and have the necessary capabilities. Economic development of the region and investment in infrastructure, employment opportunities, anti-corruption measures, integration of militants, and additional security measures will be critical to addressing the problem over the long. 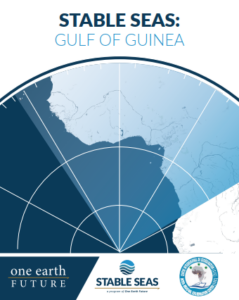