by The Editorial Team
in Connectivity, Seafarers 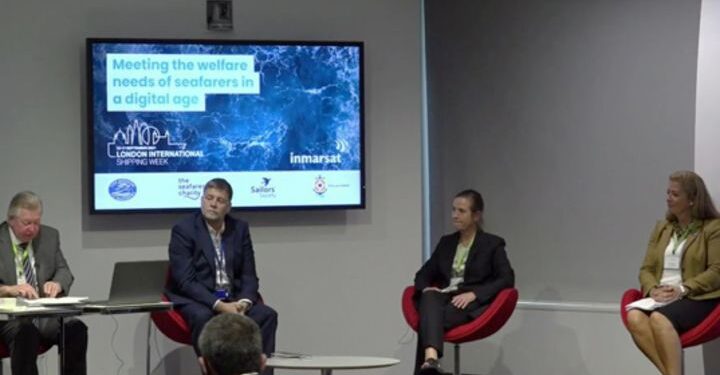 As the maritime industry looked back on a hugely challenging year for seafarers, a conference held by maritime charities for London International Shipping Week (LISW) heard how the pandemic had amplified the needs of seafarers with regard to connectivity at sea.

At a hybrid high tech virtual and live seminar, more than 250 delegates heard that technology should also continue to shape the future for seafarer welfare.

The Meeting the Needs of Seafarers in a Digital Age seminar held on the first day of LISW and hosted by Inmarset – was organised by The Mission to Seafarers in collaboration with The Seafarers’ Charity, Stella Maris and Sailors’ Society.

The charities fielded their CEOs on four different panels during the event, with panel speakers including Mark O’Neil, CEO of Columbia Ship Management; Ronald Spithout, president of Inmarsat Maritime; and David Gooberman, principal surveyor at the Isle of Man Ship Registry, and Simon Grainge, CEO at ISWAN.

It was chaired by John Adams, managing director of V Ships UK, who also serves as chair of the Bahamas Shipowners Association and vice-chair of the International Chamber of Shipping.

Mr Chubb, a former seafarer, argued for more control to be put in the hands of seafarers saying:

Technology cannot solve shipping welfare issues, it can only amplify the good and the bad. As a key saying goes “the future is here, it is just not evenly distributed”.

Secretary-general of The Mission to Seafarers Andrew Wright said the Mission also recognised that digital would remain a key element of providing seafarer welfare along with ship visits by chaplains.

The seafarers Happiness Index run by the mission is a very important digital way of listening to seafarers and measuring how they’re feeling through the year, being able to share that with ourselves, with other charities and very particularly with the shipping industry.

The conference heard many ship operators are still not providing their crew with free unlimited Wi-Fi.

Mr Wright said the Mission was still providing Mi-Fi units because seafarers had made the point that during the crew change crisis, they often had no chance on board to communicate with their families and had to wait until they got to port.

Inmarsat Maritime president Ronald Spithout agreed the last 18 months has ‘amplified the needs of seafarers and magnified things that can be done in a different way – and as a result digitalisation has accelerated.’

Mr O’Neil said the crew change crisis showed that ‘pre-emptive mental health support is critical’ for better welfare provision for all maritime staff. ‘Covid has brought a huge impact to all maritime staff working at sea and ashore in crewing, technical and treasury, working all as part of a team to keep the propellors turning.’

The increasing use of data meant that crew and shipping staff ashore ‘are no longer part of an invisible sector and they are being communicated with via sophisticated technology,’ he said.

Sara Baade, CEO of Sailors’ Society, said that during the pandemic the charity saw a real need for wellness at sea support but agreed the lack of Wi-Fi is an issue – pointing to Nautilus research on connectivity at sea that showed only 57% of seafarers have access to satellite phones/personal emails and only 6% can access video calls.

Mr Spithout suggested the only way for the industry to change rapidly and improve technology for seafarers would be if ‘targets were set’ that impacted the bottom line of the vessel, similarly to the green targets set for shipping on climate change.

‘If you are really concerned about the mental health of your people. You should give them as much as possible access to apps, and internet, so that you can monitor what they are doing on the internet, and it gives you early warning about their mental state.

‘If you look at billions every year that are completely wasted in damages that are human made because of stress and fatigue, I really am mind boggled why this is a discussion at all.’

Mr O’Neil emphasised however that Colombia Ship Management believes ‘digitalisation is the means to enhance our people’s performance, not to replace them.’

Stella Maris CEO Martin Foley agreed: ‘Technology is a critical part of our port chaplain’s toolkit but the relational and personal connection we have with seafarers remains pivotal to all we do.’