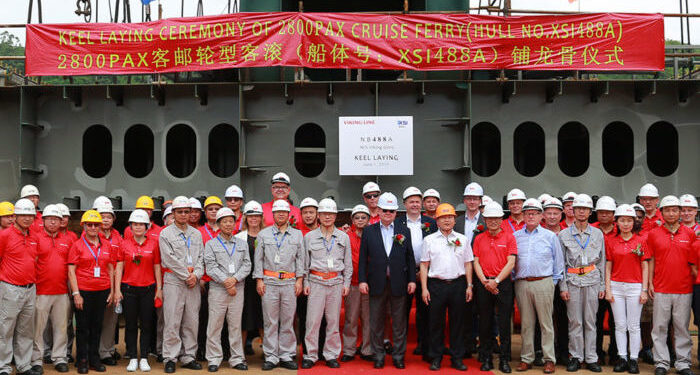 Viking Line realized a keel laying ceremony for its new cruise ship ‘Viking Glory’ on 3 June, at the Xiamen Shipbuilding Industry shipyard in China. The ship, expected to operate in Baltic, is equipped with wind-power driven rotors and environmentally friendly engines, while it features innovations such as Azipod propellers and dynamic ventilation and lighting.

Following voting suggestions by 30,000 people from Sweden, Finland, Åland and the rest of the world, Viking Line announced in late May that the new vessel will be dubbed Viking Glory.

The new climate-smart vessel is to start operations in 2021.

The new ship will sail the route between Turku, Finland and Stockholm, Sweden.

The construction is part of a Finnish-Swedish EU project that contributes to more sustainable, efficient maritime transport between Turku and Stockholm.

Namely, Viking Line, together with the Port of Turku, the Ports of Stockholm, the Port of Mariehamn and the city of Turku, have been granted EU funding from the EU’s Connecting Europe Facility (CEF) for their collaborative NextGen Link project.

The project entails an upgrade of maritime transport links between Turku, Mariehamn and Stockholm with a new vessel that runs on LNG, as well as infrastructure improvements in the ports.

The project is in line with the EU’s TEN-T priorities since it contributes to increased use of more sustainable vessel fuel and thus reduced emissions while also improving logistics in the link between Turku and Stockholm and making them more efficient.