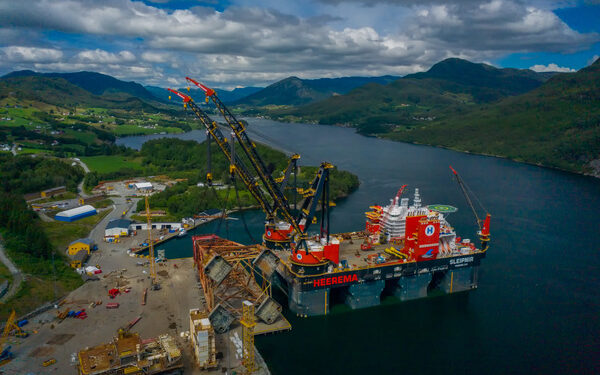 The superlarge crane vessel Sleipnir has set a new record for the largest single lift jacket removal, after successfully lifting the 8,100 tonne jacket for the Jotun-B platform in the Norwegian North Sea, last week.

Heerema’s SSCV Sleipnir removed the 8100 mT Jotun-B jacket for Vår Energi.  The platform was installed in 1998 by Heerema’s Thialf, who returned to the Jotun Field last year to remove the topsides and conductors.

For the jacket removal, Sleipnir arrived at the Jotun Field located 200 km west of Stavanger on Friday, July 11, and completed the project by offloading the jacket onto the quayside at the AF Miljøbase decommissioning site in Vats, Norway on Thursday, July 16.

The decommissioning work was completed one day ahead of schedule, as the entire removal scope in the Jotun Field rook place in only four days.

During this project, skirt piles with diameters 2.7m and 80mm wall thickness were cut subsea, the largest ever done in this way, the company said.

Now that the Jotun-B jacket has been safely and sustainably transported to Vats, it will end its lifecycle by being recycled up to 99%.