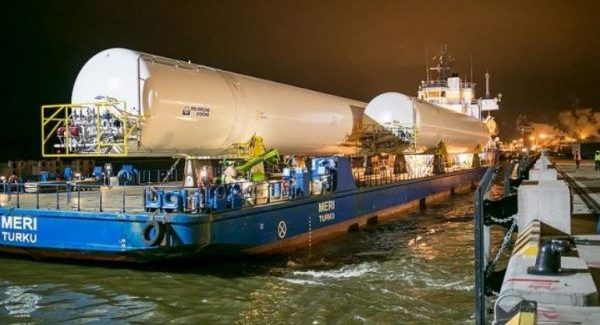 Terminal operator JSC Klaipėdos nafta (KN) collaborates with the Klaipėda State Seaport Authority (KSSA), by signing a tripartite agreement on re-constructing the KN oil terminal's berth No1, along with the winners of the public tender. The cost of the first phase works assigned to KN amounts to just over EUR 1.7 million, with the reconstruction work scheduled to begin within a month.

Accordingly, the two winners of the public tender, which was valued at EUR 22.5 million (about USD 25.2 million), were UAB Tilsta and UAB Fegda.

According to plans, the partners will construct and dredge the berth for two years.

The project sees that the unused 235-meter section of berth No 1 will be adapted for stevedoring, whereas the adjacent ship channel will be dredged to a depth of 17 meters. After the berth's reconstruction, KN will be able to accommodate and load three tankers at a time at the Klaipėda oil terminal.

On the contrary, up to now the facility was able to receive two tankers.

Specifically, KN will invest in the installation of the superstructure for the works planned to be carried out, and the port authority in the quay infrastructure.

The market has been dictating the need for these changes for some time now – the amount of cargo is growing, new types of cargo are emerging, and customer expectations are changing.

In addition, Vidmantas Paukštė, Klaipėda State Seaport Authority Infrastructure Director and acting Director-General noted that the reconstruction of the berth will increase port's of Klaipeda competitiveness.

In the meantime, the port authority implements additional infrastructure projects, as pier reconstruction and dredging of the canal, to boost KN's ability on accepting larger tankers.

Recently, Klaipedos Nafta announced that it has achieved the highest operative efficiency of the LNG terminal since the launch of its activities, as the terminal capacities are now fully booked for the rest of the Gas Year.