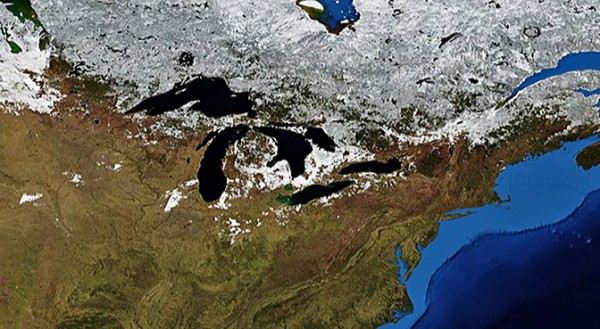 “The Great Lakes are part of our way of life and fuel our economy,” said Sen. Stabenow. “We must stop them from being destroyed by Asian carp and other invasive species. This is an emergency, and the time has come for decisive action before it’s too late. This bill will call on the Army Corps to begin work on projects that will help prevent the spread of Asian carp and require the Great Lakes Interagency Task Force to move us closer toward a long-term, permanent solution that will keep Asian carp out of our Lakes for good.”

“After years of study, we must begin making tangible progress to safeguard the Great Lakes ecosystem and the $7 billion economy it supports – and that is exactly what this bill would do,” said Rep. Camp. “The Guarding Our Great Lakes Act would take the next necessary actions to prevent the spread of Asian carp. Focusing control efforts at Brandon Road Lock and Dam and beginning to improve the Chicago Area Waterway System are vital steps that need to be taken as we continue working to find a permanent solution.”

“The federal government’s response to invasive species over the years has largely been reactive, not proactive, and we have paid a dear price,” said Rep. Slaughter. “We have to take this problem head on, which is why I’m proud to introduce with my colleagues the Guarding Our Great Lakes Act – to stop Asian Carp before they destroy the native ecosystems of our beloved Great Lakes. I’m especially proud to introduce this legislation with my friends Congressman Dave Camp of Michigan and Senator Debbie Stabenow of Michigan, who have been true champions on this issue. Congressman Camp, who is retiring at the end of this term, will be sorely missed for his leadership on Great Lakes and other important issues throughout his career, and I thank him for his dedication.”

In 2012, Sen. Stabenow and Rep. Camp secured passage of the Stop Invasive Species Act, to expedite the Great Lakes Mississippi River Interbasin Study (GLMRIS) being conducted by the Army Corps of Engineers, which was supposed to formulate a plan to prevent Asian carp from reaching the Great Lakes. However, when the study was released earlier this year, it was clear that much more work must be done to identify a permanent solution to stop the transfer of aquatic invasive species between the Great Lakes and Mississippi River watersheds.

The Guarding Our Great Lakes Act would take the intermediate steps necessary to safeguard the lakes and work towards a long-term plan through a two-pronged approach. First, it directs federal invasive species control efforts to the Brandon Road Lock and Dam in Joliet, IL, south of the Chicago Area Waterway System (CAWS). Second, it directs the Great Lakes Interagency Task Force, comprised of eleven federal agencies and chaired by the Environmental Protection Agency, to work with state and local agencies to identify and begin work on water quality and flood mitigation projects that will be necessary for any permanent solution.

In the start, I was forthright with you propecia before and after has changed my essence. It has become much more fun, and now I have to run. Just as it is fabulous to sit.