Jan joined UNCTAD in 2003 and became Chief of the organization’s Trade Logistics Branch in 2016. The Branch is implementing multilateral transport and trade facilitation capacity building programmes, as well as regional and national projects in Africa, Asia and the Pacific, and Latin America and the Caribbean. Jan is co-author and coordinator of the annual UNCTAD Review of Maritime Transport, created and co-edits the quarterly UNCTAD Transport and Trade Facilitation Newsletter, and initiated the UNCTAD Maritime Country Profiles and the quarterly Liner Shipping Connectivity Index. Previously, Jan spent six years with the United Nations Economic Commission for Latin America and the Caribbean (ECLAC) in Santiago de Chile, and two years with the International Maritime Organization (IMO) in London and Santiago. Prior to this, he held part time positions as assistant professor, import-export agent, seafarer, translator, and consultant. For eight years, he also worked part time for the family tramp shipping business Hoffmann Shipping, based in Horneburg, Germany, with a tweendecker registered in St. Johns, Antigua and Barbuda.
Jan has studied in Germany, United Kingdom, and Spain, and holds a doctorate degree in Economics from the University of Hamburg. His work has resulted in numerous UN and peer reviewed publications, lectures, technical missions, data bases, and electronic newsletters. Jan is member of AJSL, CPI, FFSC, IJSTL, INCU, JST, MEL, MPM, and the Propeller Club of Geneva. From 2014 to 2018, Jan was president of the International Association of Maritime Economists (IAME). Jan has had his hair cut in 73 countries. He has three sons and one wife. 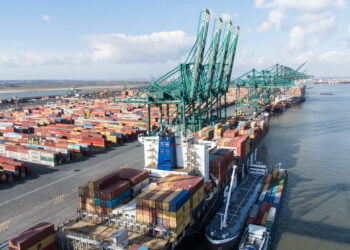 In an exclusive interview to SAFETY4SEA, Mr Jan Hoffmann, UNCTAD’s Head at Trade Logistics Branch, Division on Technology and Logistics, refers to key findings and alarming trends revealed by the latest UNCTAD Review of Maritime Transport.