Yara to use ammonia-to-power system to decarbonize operations 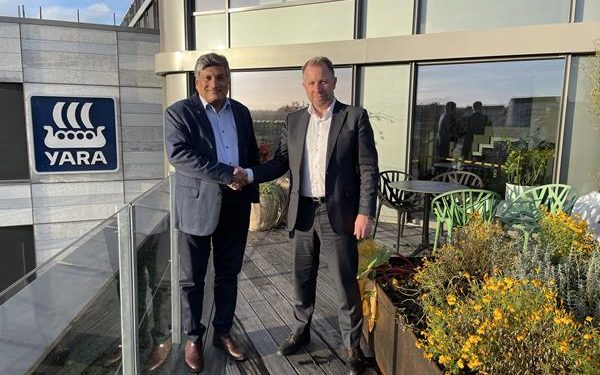 Amogy signed a collaboration agreement with Yara Clean Ammonia (YCA), for the latter to consider Amogy’s ammonia-to-power system as a zero-emissions solution for use within future shipping projects.

The companies will also pursue opportunities with external partners, including shipowners, for Amogy to deliver its proprietary technology and YCA to deliver Clean Ammonia.

YCA has large ambitions to commercialize the application of low carbon Blue and renewable Green Ammonia to enable decarbonization of hard to abate industries, including the application of Clean Ammonia as a marine fuel. YCA is currently building an ammonia bunkering network in Scandinavia with the first Bunker Barge to be operational in 2024.

Amogy has developed an ammonia-to-power platform, already demonstrated in a drone and heavy-duty tractor, which relies on an ammonia cracking technology in which hydrogen is extracted from ammonia on-board for use in a fuel cell.

Amogy is currently scaling this energy-dense, zero-carbon power system for use in maritime vessels, to support the decarbonization of global shipping. Amogy has also announced the first commercial deployment of its technology in an ammonia tank barge in 2023, in partnership with Southern Devall.

As Amogy pursues commercialization of its technology within oceangoing vessels, YCA and Amogy will collaborate for these efforts, including potential integrations in tugboats, barges, offshore supply vessels and other ships.