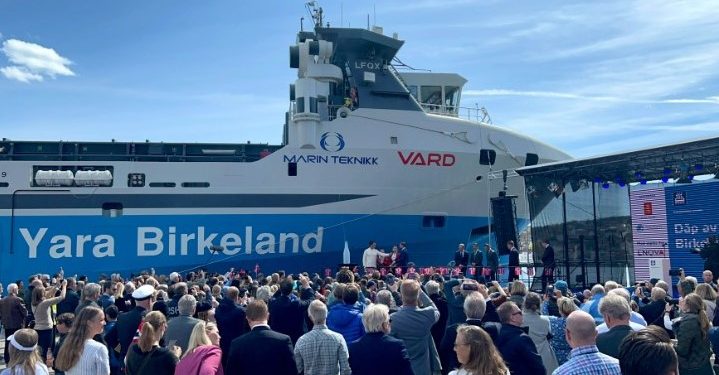 The emission-free ship was christened by not only one, but two godmothers. To represent the future, young Pernille Gundersrud (12) and Malene Moen Straume (12) took on this honourable role. The christening took place close to the Yara Porsgrunn plant.

The ship will transport fertilizer across the fjord from Yara’s Porsgrunn plant to Brevik port, eliminating the carbon emissions of 40,000 diesel truck loads per year.

In his speech, His Royal Highness Crown Prince Haakon Magnus of Norway addressed the young ones, as well as Yara:

It takes courage to create something new. It requires investment, patience, and an ability to not give up after the first try. Innovation requires trial and error – and trial and error again – until you succeed

Commenting on the christening, Svein Tore Holsether, President and CEO of Yara International, said that this is a milestone for Yara, whose ambition is to build the world’s first carbon-free container vessel.

Yara developed the battery-driven ship in collaboration with several Norwegian partners. Kongsberg Maritime has developed and delivered the technology. The ship is built by Vard.

Yara Birkeland will be operated by a joint venture undertaken by the Kongsberg Group and Massterly, which is owned by the Wilhelmsen Group. Enova, owned by the Norwegian Ministry of Climate and Environment, has contributed financially (NOK 133.5 million) to the development of Yara Birkeland.

Yara Birkeland will be put into operation in 2022. Initially, it will start a two-year trial period to become autonomous and certified as an autonomous, all-electric container vessel.