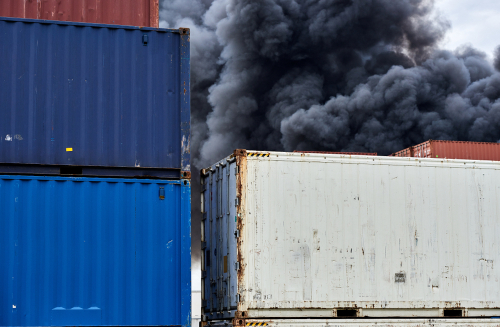 In January's monthly report, the Swedish Club reports of an incident where a container that although was allowed to be loaded in the cargo hold, it should not have been loaded below deck or in the position it was stowed in, led to a fire.

During early morning hours, the Master was at the bridge of the vessel when they observed a large cloud of smoke issuing from the forward part of the vessel. At the same time the fire detection system for cargo hold 3 sounded on the bridge.

According to the Master, the smoke was first white and then greyish. Yet, the Chief Officer, however, described the smoke as being “dark grey, almost black”.

The next morning, salvors boarded the vessel to better check the vessel. Shortly before midnight, temperature checks were completed by the vessel’s crew indicating that the temperature in cargo hold 3 was rising so five more CO2 cylinders were released.

In the morning, another 20 CO2 cylinders were released. The salvors entered cargo hold 2 and measured the temperature for the bulkhead to cargo hold 3 - it was 80°C. It was decided that cargo hold 3 should be filled with water from the fire hydrants. The water filled three container tiers up and after a couple of hours the salvors considered the fire to be extinguished.