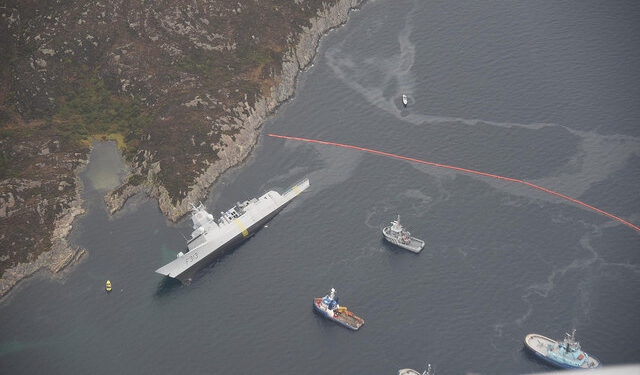 The wrecked Norwegian frigate Helge Ingstad will be scrapped in Norway, two years after its collision with a tanker off Sture Terminal.

Specifically, the Norwegian defense ministry informed that a contract for the demolition and recycling of the vessel has been awarded to Norscrap West AS. Work will take place at the company’s facilities in Hanøytangen, Norway.

Helge Ingstad is currently in Ågotnes, Norway, where it waits for the finalized plans of the demolition sometime in February.

The Helge Ingstad collided with the oil tanker Sola TS, as the latter was departing the Sture terminal in the Hjeltefjord in November 2018. Due to the collision, the frigate experienced extensive damage to its starboard side, which made it partially sink.

According to the report by the Accident Investigation Board Norway, multiple operational, technical, organizational and systemic factors contributed to the accident. What is more, the frigate was not transmitting its automatic identification system signal when it collided with the tanker in the dark early morning hours.

As for the demolition process, technical director of Defense Materiel Jonny M. Otterlei, said that they have set strict requirements for the implementation of the destruction, and taken care of both environmental aspects and safety considerations.