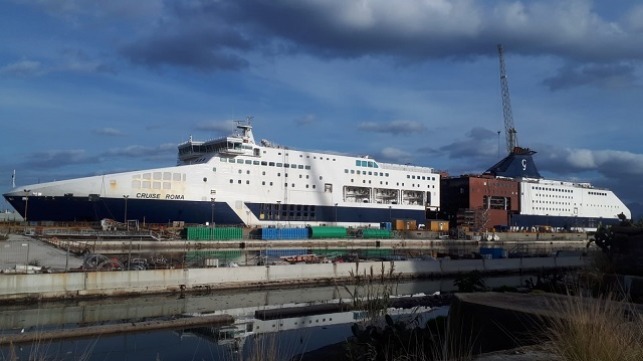 In Palermo, Italy, ALE finalized the lengthening of two ships to make them the longest cruise ships in the world. The Grimaldi Roma and Grimaldi Barcelona operate on the busy Civitavecchia-Barcelona route and the lengthening has increased the capacity on both ships.

ALE installed new sections and successfully lengthened each ship by 30m, taking them to around 255m once complete. As both cruise ships were similar, the works could be conducted using the same specialist heavylifting procedure.

Following that, the intermediate section was transported to its final position to be joined with the aft section. Finally, the bow was skidded to be joined to the new section.

The Grimaldi Roma and Grimaldi Barcelona are two sister ships that were built in 2007 and 2008 respectively. After the lengthening, each vessel now has 600 linear meters more for heavy vehicles, capacity for an extra 80 sleeping berths in new passenger cabins and two new public spaces.