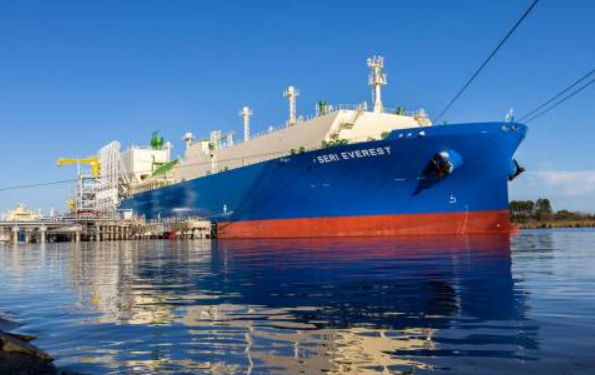 Seri Everest, the world’s largest VLEC, departed the terminal in Texas sailing to China. Loaded with more than 911,000 barrels of ethane destined for Satellite’s Lianyungang ethane cracker in northeastern Jiangsu Province, China, the vessel represents the largest single shipment of ethane to date.

Specifically, the gas which is a derivative stripped from natural gas, is in strong demand, especially in Asia, where it is used as an alternative to butane and propane by the petrochemical industry.

According to reports, the vessel began its voyage from Orbit Gulf Coast NGL Exports’ newly constructed export facilities at Energy Transfer’s Nederland Terminal in Nederland, Texas, on January 17, 2021. It is scheduled for Satellite Petrochemical’s Lianyungang ethane cracker in northeastern Jiangsu Province, China. Its anticipated arrival at Lianyungang Port is mid-February 2021.

The record load of 911,000 of ethane was loaded aboard the Seri Everest, the world’s largest VLEC. The first in a class of six vessels, the Seri Everest was built by Samsung Heavy Industries and delivered to MISC Berhad in October 2020.

This shipments marks the second large gas shipment to depart from the terminal in Texas. In December, the BG Gemini was loaded with a record 49,000 metric tons of LPG on its first voyage since being converted into a dual-fuel LPG vessel. This ship is currently sailing to Japan, where it is expected to arrive at the end of the month.

Under the joint venture with Satellite, Energy Transfer is the operator of Orbit’s assets, which also include a newly constructed 20-inch pipeline originating at Energy Transfer’s fractionation and storage facilities in Mont Belvieu, Texas, for ethane deliveries to the Nederland export terminal as well as domestic markets in the region.