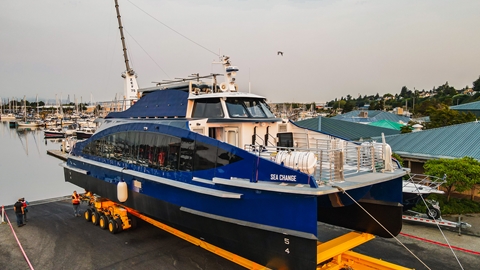 Delivered by All American Marine, the project has been spearheaded by the vessel owner SWITCH Maritime and was brought to fruition by a consortium of contributors, including Incat Crowther, Zero Emissions Industries, BAE Systems and Hornblower Group, who Incat Crowther worked closely with on the recent NYC Ferry newbuild program.

The project is supported by a grant from the California Air Resources Board, administered by the Bay Area Air Quality Management District, that comes from the California Climate Investments initiative, a California statewide program that puts billions of Cap-and-Trade dollars to work to reduce greenhouse gas emissions, strengthen the economy, and improve public health and the environment – particularly in disadvantaged communities.

Upon delivery, the vessel will operate in the Bay Area of California and exhibit the viability of the hydrogen fuel cell marine technology and demonstrate a pathway to commercialization.

The vessel is equipped with a hydrogen fuel cell power package provided by Zero Emissions Industries (formerly Golden Gate Zero Emission Marine), comprised of 360 kW of Cummins fuel cells and Hexagon hydrogen storage tanks with a capacity of 246 kg. This system is integrated with 100 kWh of a lithium-ion battery provided by XALT and a 2x 300 kW electric propulsion system provided by BAE Systems.

Incat Crowther developed an arrangement for the vessel that accommodated the new propulsion technology, integrating it into the vessel’s structure and systems.

The vessel’s hull form was optimised to reduce resistance, whilst further efficiencies were gained in the structural design for Sea Change, with Incat Crowther delivering its customary mix of robustness and low weight.

Concluding, the vessel is accessible by disabled persons and includes ramps to the bow and side loading gates. The bow utilises a standard bow radius for use in many US cities. The elevated wheelhouse affords excellent visibility over bow loading operations.