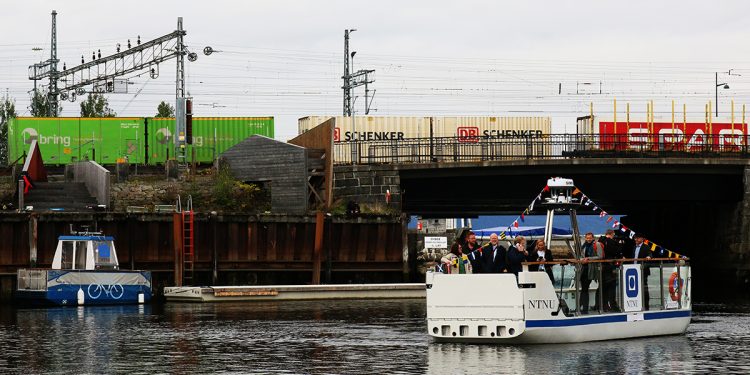 The autonomous passenger ferry milliAmpere 2 is now running shuttle traffic across the main channel in Trondheim until mid-October. The public can us the ship during the trial period and test the new technology.

This is the first time a self-propelled electric passenger ferry has been put into trial operation along urban waterways. The NTNU ferry was developed by researchers and students from several academic areas who collaborated to develop milliAmpere 2 and its precursor milliAmpere that was Norway’s very first prototype of an autonomous ferry.

Experience from the first prototype showed a need for the hull to be able to accommodate more technology. Below deck, the hold is filled with batteries, chargers, powerful computers and a system for dynamic positioning.

A number of sensors including rangefinders, cameras, laser vision and radar are mounted on deck so that the automation system receives enough data about the surroundings to avoid collisions with land or other vessels.

In addition, sensors have been installed that will give an operator in a land-based control room a good enough understanding of the situation to be able to take over control should the need arise.

The design experiences have also been important. Railings and bench surfaces for the new model are made of wood to give a little warmer feel than with the first version.

The passenger ferry has room for 20 people, but will be limited to a maximum of 12 passengers on board at one time during the trial operation.

During the trial, researchers with a background in design, psychology and sociology will survey passengers’ reactions and experiences, including whether they feel safe using the ferry or not, and factors that contribute to making the experience safe or unsafe.

During the trial operation, a person will be present on the ferry to ensure safety.