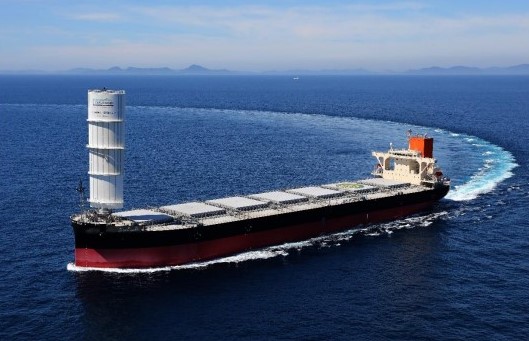 The SHOFU MARU is the world’s first vessel equipped with Wind Challenger, and will transport coal mainly from Australia, Indonesia, and North America as a dedicated vessel for Tohoku Electric Power Co.

The introduction of the Wind Challenger is expected to reduce greenhouse gas emissions about 5% on a Japan-Australia voyage and about 8% on a Japan-North America West Coast voyage, compared to a conventional vessel of the same type, and contribute to curbing GHG emissions during fuel transportation.

At the completion of the vessel, a naming and handover ceremony was held at Oshima Shipbuilding.

MOL and Tohoku Electric Power Co. continue to work toward both stable transport of energy resources and reduction of their environmental impact

According to IWSA, the latest installations of wind propulsion technology on large commercial vessels have tipped the amount of cargo that can be transported on vessels that make use of wind as a renewable energy source over the one million tonnes of deadweight (DWT) milestone.