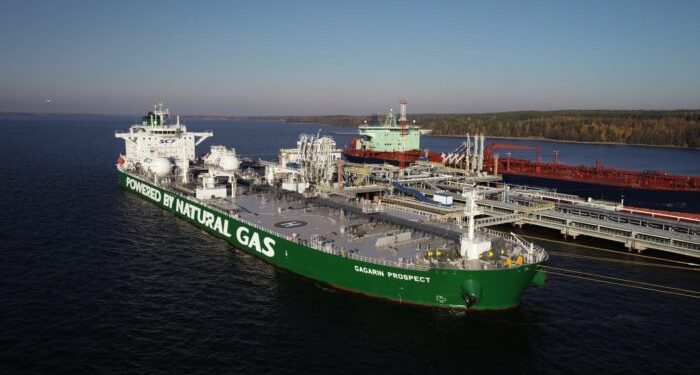 ‘Gagarin Prospect’ is the lead ship of the next generation of tankers, which help Sovcomflot reduce its impact on the natural environment. This is particularly important for ships in high-traffic areas such as the Baltic and North Seas.

Sovcomflot is trying to switch its conventional tanker fleet from traditional heavy fuel oil to LNG. This aims to limit its environment footprint and to comply with upcoming sulphur cap regulations in 2020.

On 2 October 2018, the inaugural LNG bunkering of ‘Gagarin Prospect’ took place at the Port of Rotterdam, and on 15 October, the vessel loaded its first export cargo of Russian crude oil at the Port of Primorsk. On 18 October 2018, an event in Rotterdam marked the start of the successful operation of the tanker.

Sovcomflot expects to have six such LNG-fueled Aframax tankers in operation by the beginning of the second half of 2019.