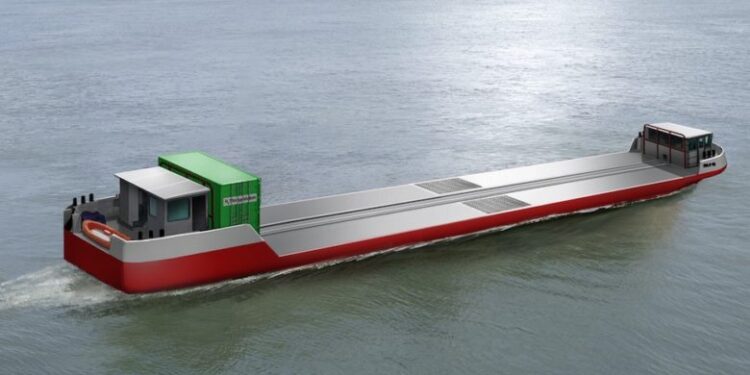 The project Flagships is expected to deploy what is considered to be the world’s first commercial cargo vessel that operates on hydrogen.

The ship will begin commercial operations in 2021, operating on compressed hydrogen produced from electrolysis.

The vessel will be owned by French inland shipowner Compagnie Fluvial de Transport (CFT), while it will be tasked with moving goods on pallets and containers along the river Seine.

Commenting on the project, Matthieu Blanc, Director of Compagnie Fluvial de Transport, said that currently, the demand for more sustainable technologies in inland waterway transport is on the rise.

After the EU identified the shipping industry as a key contributor in the efforts to address climate change, the flagships project received €5m ($5.9m) in 2018.

The project’s plan at first was to deploy a hydrogen push-boat in the French city of Lyon. Howeve, as the potential for hydrogen in cargo transport emerged, the demo pusher changed to an inland cargo vessel.

The shift in focus is based on Sogestran Group’s experience gained in Belgium, where Blue Line Logistics (BLL) operates three cargo vessels sailing under the concept name Zulu.

The Flagships project will install a hydrogen power generation system on one of the newbuilds, planned for delivery in September 2021.

Blue Line Logistics also aim to have the ship operating on hydrogen before the end of 2021.

The ship concept has the project name “With Orca” – Powered by Nature, as a significant part of the energy required to operate the vessel will be harvested directly from the nature trough two large rotor sails.

The vessel’s sailing route will mostly be in open waters in the North Sea, where wind conditions are good for wind assisted propulsion. To counter drifting, the vessel will be equipped with a specially developed keel.