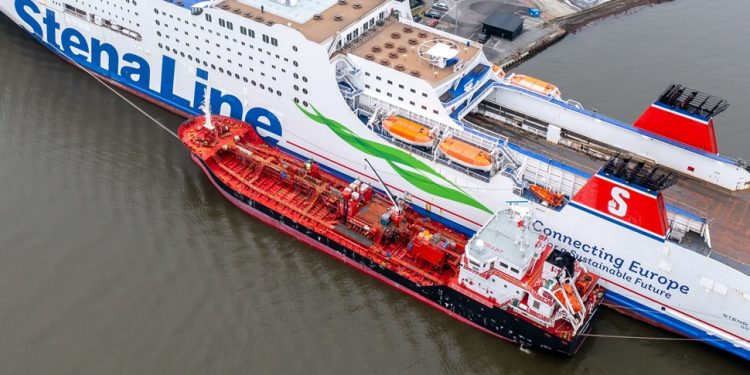 A milestone for the use of methanol as a marine fuel was achieved in the Port of Gothenburg on January 23, as the methanol-propelled vessel Stena Germanica was the first non-tanker vessel in the world to be bunkered with methanol ship to ship.

The bunkering was made possible by several different stakeholders collaborating throughout the whole process. Operating regulations for methanol bunkering is a prerequisite that the Port of Gothenburg was the first in the world to publish in April 2022.

Stena Line is the owner of the vessel in question and the purchaser of the methanol. The tanker operator E&S carried out the bunkering itself in practice, and methanol producer and supplier Methanex provided the fuel.

This is a door-opening demonstration, proving that there is a feasible way to handle ship to ship methanol bunkering. This strengthens our position as a bunker hub and is also showcasing for other ports that this can be done in a safe and efficient way – not only here, but in other ports around the world as well

As Maria Tornvall, Head of Sustainability at Stena Line, reminded, “the Stena Germanica, connecting Gothenburg, Sweden with Kiel, Germany, became the world’s first methanol-powered ferry when Stena Line converted the 240-meter vessel in 2015 in partnership with Methanex, Wärtsilä, the Port of Gothenburg and the Port of Kiel”.

This first ship to ship methanol bunkering for a non-tanker, leveraging our partners E&S Tankers and Port of Gothenburg, is further evidence that methanol is globally available, safe to ship, store and handle using procedures similar to those for conventional marine fuels