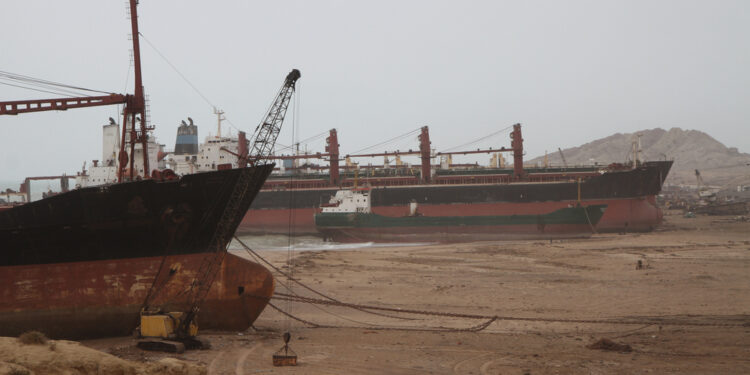 Pakistani authorities have suspended dismantling operations of the Floating Storage and Offloading (FSO) tanker J. NAT in Gadani, over concerns of mercury-contaminated oil sludge onboard which injured several shibreaking workers.

The ship has been beached on the shipbreaking shores of Gadani, Pakistan despite clear warnings by Interpol and international civil society groups that it contains high levels of toxics, NGO Shipbreaking Platform informed.

Despite presence of hazardous substances onboard the vessel, workers were instructed to initiate its scrapping at Plot 60 on the Gadani shipbreaking beach.

Local media reported that mercury-contaminated oil sludge was removed from the ship and filled in drums for sale, with workers complaining of severe burning, rushes on their hands and face, and breathing difficulties. It is further likely that the vessel’s steel is contaminated by mercury, which will release extremely toxic vapours when heated by for example torch-blowers, the Platform reported.

For more than a year, the vessel has been under the spotlight of enforcement agencies and public watchdogs for its illegal export from Indonesia and the multiple attempts to illegally scrap it in South Asia.

In Bangladesh and India, local authorities banned its entry due to the dangerous presence of hazardous substances in its steel structures, ballast waters, oil slops and oil sludges following alerts by NGOs.

In an attempt to conceal the ship’s identity, its name has been changed several times, from J. NAT to RADIANT to CHERISH, and its real-time location concealed. After several months off the radar, the vessel recently reappeared in Mumbai before initiating its final voyage towards Pakistan.

This case is a shocking example of how companies make profits on the backs of vulnerable workers and coastal environments. It is an environmental crime to dodge international laws that ban the trade of hazardous wastes, and the shipping industry has a duty of care to ensure human rights due diligence when selling their obsolete assets,