by Francisco Malta
in Fuels, Opinions

Now that the sulphur cap is effective, blending is the only economical method to produce low sulphur fuels, states Mr. Francisco Malta, Director at VM Industrials – Aderco Australia who explains that VLSFOs could increase black carbon emissions because of paraffinic hydrocarbons; thus, shipping industry needs to focus on fuel stability and address all issues.

The purpose of the roundtables is for those in shipping and impacted by the IMO 2020 sulphur limit changes to understand the new rules and regulations, to have a voice in IMO discussions, and assure a safe transition on the 1st of January to VLSFO 0.5% Sulphur.

As a whole, Australia and shipping have managed relatively well with only minor glitches and without too much disruption.

One topic raised at this roundtable is something being discussed extensively since the introduction of Very Low Sulphur Fuel Oil (VLSFO 0.5% sulphur). It is a concern in the possible increase in black carbon emissions. Particularly noticeable in the Arctic with its snow-white landscape.

The Clean Arctic Alliance CAA has called for immediate action to stop the soot landing on ice, as the soot retains heat from the sun and speeds up the melting of the Arctic.

The IMO (SUB-COMMITTEE ON POLLUTION PREVENTION AND RESPONSE 7th session Agenda item 8) made a claim that the new VLSFOs are blends with a high content of aromatics hydrocarbons and that this was the reason behind the BC emissions.

However, we have found this to be the opposite, and VLSFOs are actually comprised of more paraffinic fuels. The International Bunker Industry Association IBIA has also debunked the IMO’s aromatic theory confirmed the majority of new O.5% fuels are mostly paraffinic and should emit less BC emissions.

Believe it or not, today, paraffinic hydrocarbons in VLSFOs could actually be the reason for black carbon emission.

As puzzling as it may seem, the realisation of this phenomenon dates back to the automotive diesel-gate fiasco of 2011.

As countries in the western world began gradually reducing sulphur limits for fuels used in vehicles, a change came about in the method to “economically” produce ultra-low sulphur fuels (ULSFs), with as little as 10 and 15ppm (0.01%-0.015%) in sulphur content.

These fuels were no longer refined in one location and delivered to the fuel supplier or fuel user. This was too costly. A study prepared for the ICCT The International Council On Clean Transportation in 2012 concluded the cost to desulphurise fuel at a single refinery was anywhere between 0.8 cents and 3.2 cents per litre.

This marked the beginning of the mass blending of crudes and fuel batches from all sources and regions, and the same is happening with VLSFOs. 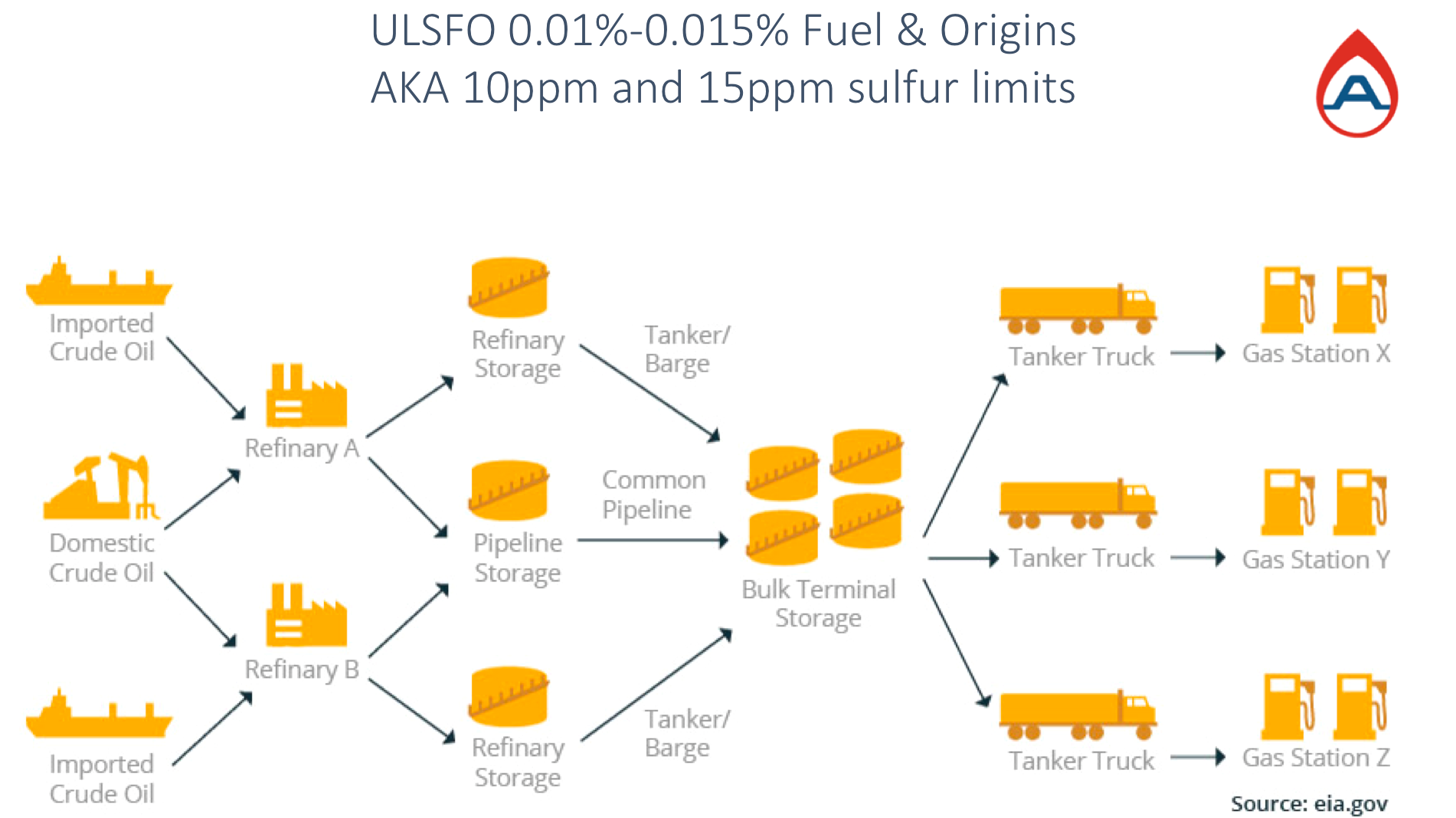 As seen above fuel producers began to blend batches of refined fuels from different sources, regions, and refineries to economically achieve the new ULSFO’s.

Where did things go wrong? 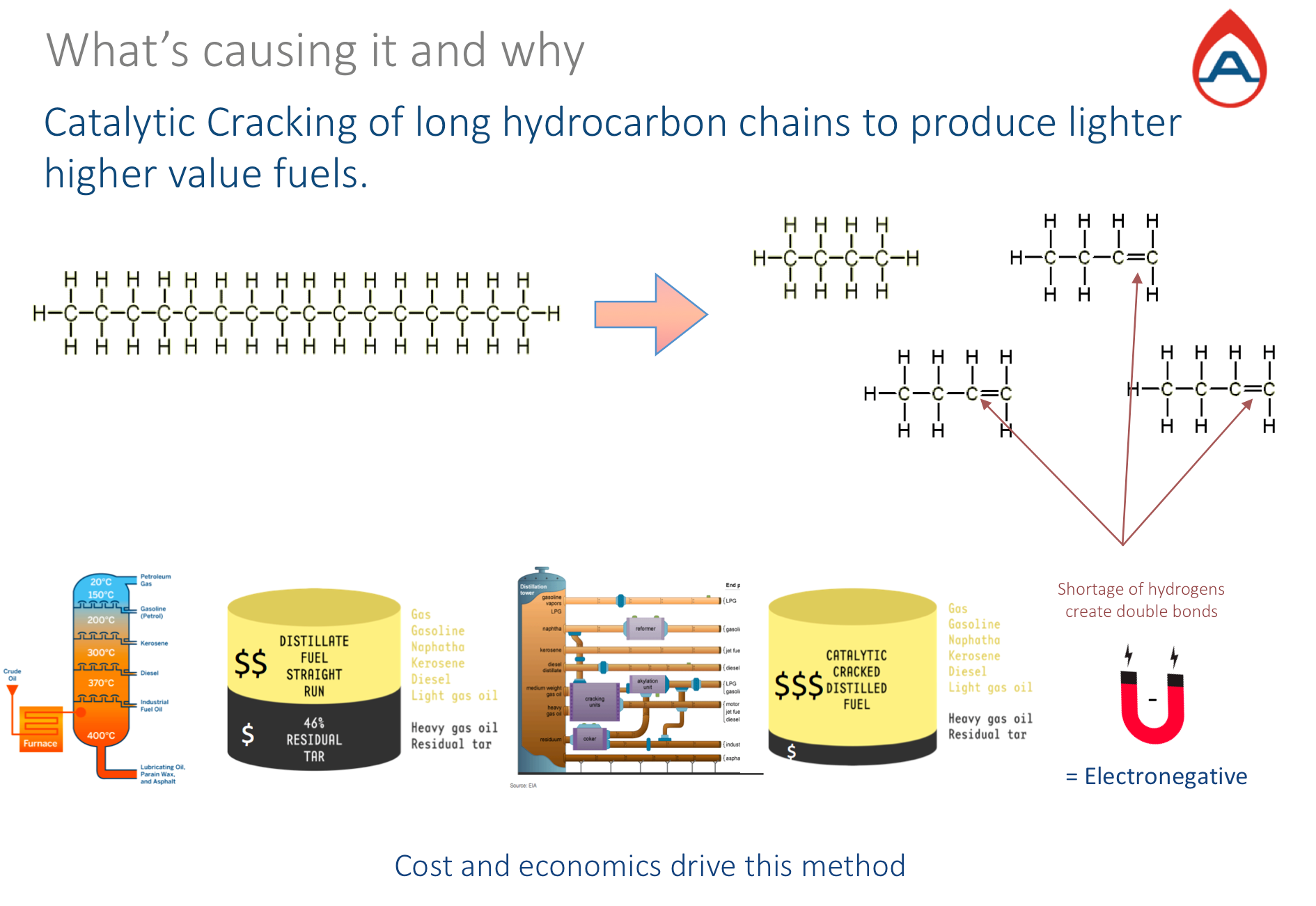 The images above right show a hydrocarbon chain fractioned into many smaller chains to produce lighter fuels with a higher value from a barrel of crude oil. These processes are not new in refining, they have been tried and improved over many years, dating right back to the beginning of refining fossil fuels, however, they play an important role in the issues today.

Notice on the left of the image above the hydrocarbon chain is completely circled by hydrogens and as the chain is fractioned as seen on the right there are not enough hydrogens to completely encircle the smaller chains.

This would be the normal process in a refinery without blending.

However, if hydrogenation does not take place the fractioned chains remain double-bonded, incomplete, and unstable. Their electronegativity increases and the chains become magnetic, they attract other hydrogens from other chains and hydrogens from water (H2O) droplets, present in fuels from condensation.

Unfortunately, when blending batches from many different refineries and sources this process is no longer taking place on every batch. As this is at such a molecular level and does not change the fuel specification, the batches with a shortage in hydrogens are not even identifiable. 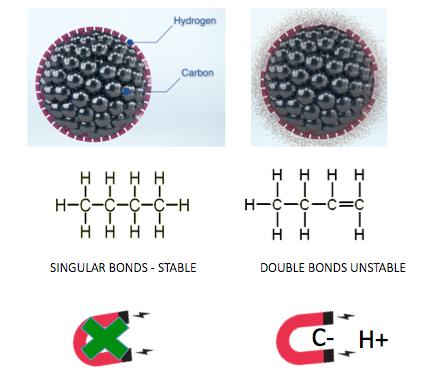 The other negative factor with double bonds is their bonds have twice the strength and therefore require twice the energy to combust.

So, in simple terms, the fuels are now magnetic and holding on to other hydrocarbons and water droplets – remembering that water is made of two hydrogens and one oxygen.

The result is a far heavier agglomeration of multiple paraffinic chains with water, requiring far more energy to combust. Therefore the combustion results in unburnt hydrocarbons that exit as BC black smoke emissions. 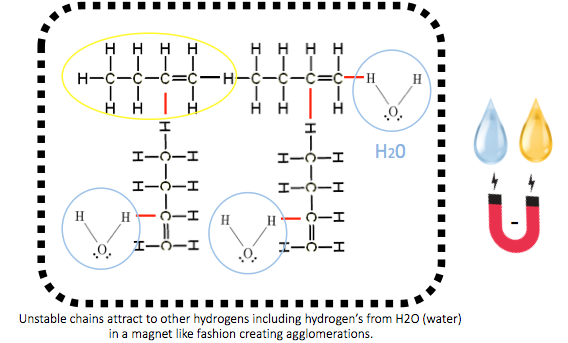 In modern cars, BC emissions were not visible because most cars had Diesel Particulate Filters (DPFs) to capture these un-burnt particles… but they were problematic and car DPFs were filling up more rapidly than they could regenerate.

As the unstable hydrocarbons continue to agglomerate on the left of the image above, the fuels become heavier than what they were intended to be, they continue to be “On Specification” however, complete combustion is now far more difficult for an engine to achieve.

The irony is that HFO 3.5% S containing asphaltenes often have a number with highly electronegative hydrocarbons, that attract and agglomerate other asphaltene molecules. The difference is that when these agglomerate they become so heavy they drop from suspension and end up as sludge in tanks, they rarely ever make their way to combustion unless singular.

In this new VLSFO scenario, the agglomerations of paraffinic molecules remain light enough and suspended and do make their way to the combustion chamber.

However, as these practices became exposed, many had no option than to give up on diesel and start to plan for an electric future.

What wasn’t understood was how much the impact of ULSF blending would have on the automotive industry… and this is now fairly clear and confirmed, as every major fuel supplier’s offer special premium fuel – the fix!

These premium fuel solutions come in different forms of additives from solvent-based combustion improvers that alter fuel specifications to reach complete combustion. To non-solvent green technologies that physically neutralise the electronegative effect without altering the fuel specifications – As shown in the image below. 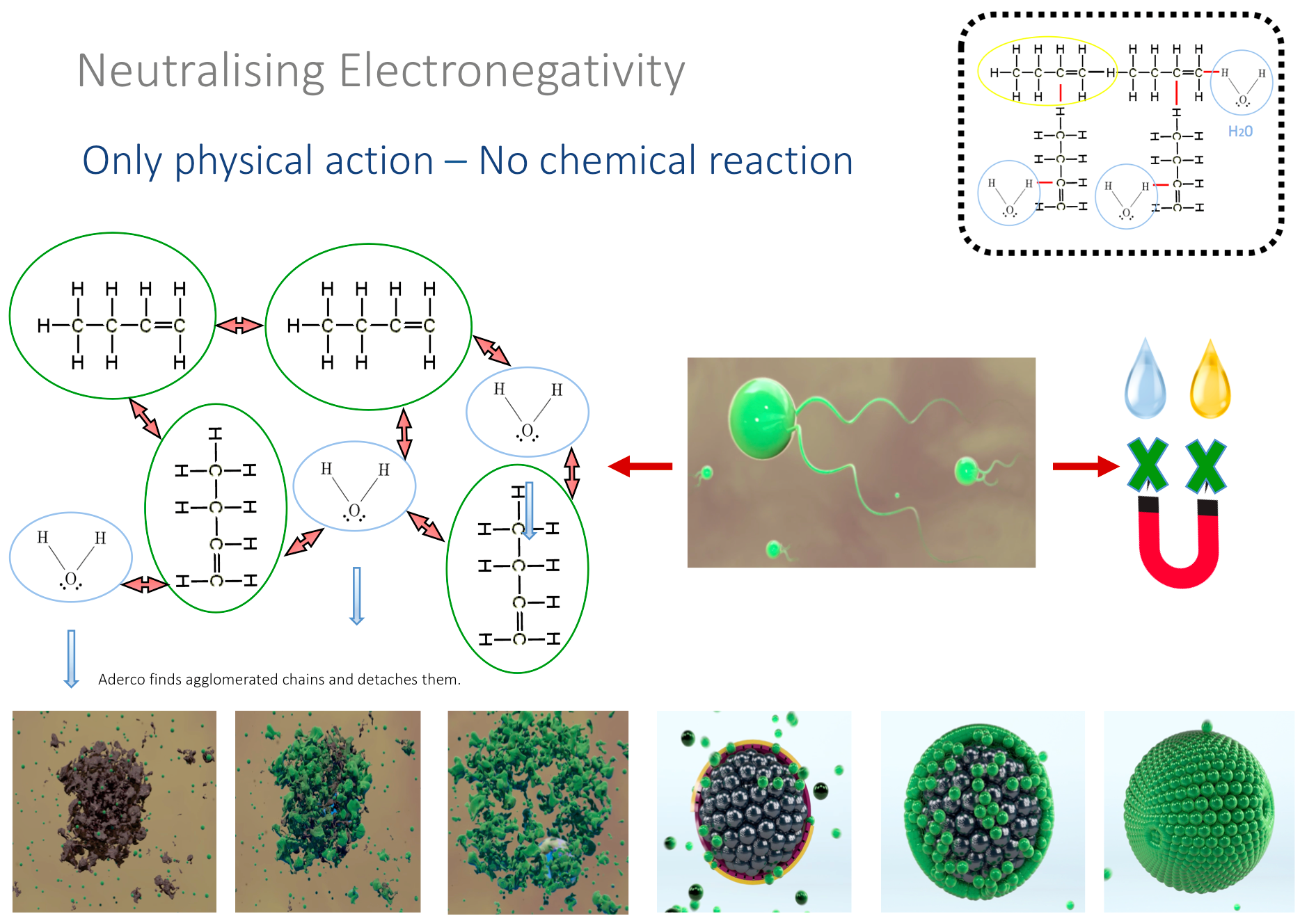 In all cases, the desired outcome is complete combustion without leaving the excess in partially burnt fuel resulting in Black Carbon emissions.

BC emissions are most prevalent at low engine speeds when the combustion is most difficult, this may explain why so much is present in the Arctic, not only is the black on the white landscape visibly obvious, it is likely the ships are operating at low loads with caution to avoid and navigate icebergs. This would not be exclusive to the Arctic, given the same fuel, engine and operating conditions BC could happen in any location.

Blending is here to stay, there is no turning back, “that ship has sailed”. Blending is the only economical method to produce low sulphur fuels and just as the automotive industry found, the shipping industry may not be able to operate without excessive black carbon emissions if fuel stability is not addressed.

Thanks to the automotive industry, the advantage of shipping is that we may know the why and how to fix it.