What Australia requires for the protection from asbestos on ships 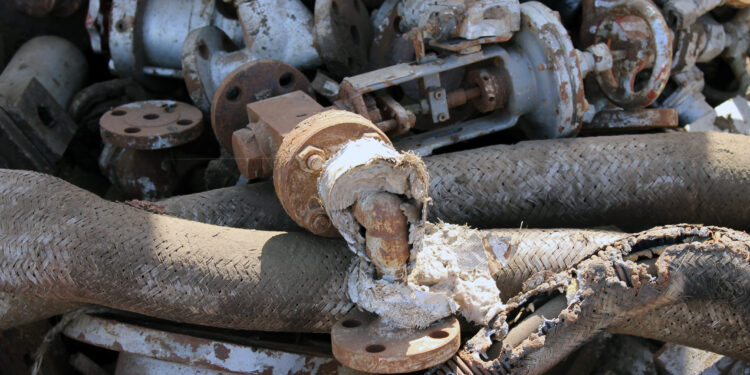 AMSA has issued a new Marine Notice to draw the attention of operators and ship owners to the ongoing prohibition of asbestos on ships, noting that Australian law requires operators to take all reasonable steps to protect the health and safety at work of employees and contractors.

Asbestos is a hazardous substance and under the Occupational Health and Safety (Maritime Industry) Act 1993 and the associated Occupational Health and Safety (Maritime Industry) (National Standards) Regulations 2003 (Regulation 2.08 and Schedule 2, column 2) operators must ensure that asbestos1 is not used at a workplace under the operator’s control.

An exception has been made under the Regulations (2.08 and Schedule 2, column 3) for ‘in situ’ asbestos. This is asbestos that has been fixed or installed in a ship (or any other structure that forms a maritime workplace) or a plant (or any other thing that is used in a maritime workplace) before 31 December 2003 in such a way that it will not constitute a risk unless the asbestos is disturbed.

In situ asbestos on ships must be appropriately identified and managed using an asbestos management plan to assess, control and mitigate any risk from asbestos as described in Part 2 of the Occupational Health and Safety (Maritime Industry) (National Standards) Regulations 2003. Additional guidance is provided in Part 8 of the Guidance on prohibition on the use of asbestos in workplaces in the Seacare jurisdiction and Safe Work Australia’s Code of Practice – How to Manage and Control Asbestos in the Workplace.

Despite the above, the best outcome is the complete removal of asbestos and asbestos containing materials from ships. Any work on the removal or disposal of asbestos is to be done in accordance with the State or Territory legislation. Operators and owners should contact the relevant State or Territory Workplace Health and Safety regulator to ensure that removal work is done as per the applicable legislation and relevant Code of Practice.

From 31 December 2003 the installation of asbestos on Australian ships has been prohibited. The same prohibition has been effective internationally from 1 January 2011, in accordance with SOLAS Chapter II-1 Reg. 3-5.2.

It is recommended that the asbestos inspection on Australian ships be conducted in accordance with AS/NZS ISO/IEC 17020 or the Code of Practice – How to Manage and Control Asbestos in the Workplace and hold documentation confirming that no asbestos is present. Such documentation includes a certificate or report issued by a body holding National Association of Testing Authorities, Australia (NATA) accreditation or other body accepted by AMSA (which must be accredited to internationally recognised standards to conduct independent asbestos inspections and testing on ships) to verify the absence of asbestos.

Despite the requirement to eliminate the presence of asbestos, it continues to be found in existing as well as newly built / delivered ships.

Asbestos containing components may also find their way into a ship during operational maintenance. This highlights the need for vigilance and periodic re-inspection of maintenance and refit works.

For ships entering or intending to enter Australian waters, including foreign registered ships, any import of asbestos and asbestos containing products is prohibited under the Customs (Prohibited Imports) Regulations 1956 (s.4C).

The Department of Immigration and Border Protection should be contacted to ensure that appropriate inspection and certification measures are in place, prior to entering Australia.

Further guidance relating to asbestos can be accessed at:

Department of Immigration and Border Protection