US Acting Secretary for Defense, Patrick M. Shanahan, revealed the US plan regarding the Indo-Pacific security, during the International Institute for Strategic Studies (IISS) Shangri-La Dialogue in Singapore. Mr. Shanahan presented the key aspects of the Department of Defense’s Indo-Pacific Strategy Report, which was released on June 1.

Patrick Shanahan, the Australian Minister for Defence, Linda Reynolds and Japanese Minister of Defense, Takeshi Iwaya, took part in a trilateral defense ministerial meeting in Singapore on June 1, reinstating their joint vision for an Indo-Pacific region that is open, inclusive, based on specific rules and respects sovereignty.

The ministers highlighted the importance of supporting Association of South East Asian Nations-led regional architecture and their support for ASEAN centrality, saying that it has a key role in creating norms of behavior and improve cooperation in the region.

In addition, there was a discussion regarding the importance of compliance with to international law, as well as their shared commitment to ensuring freedom of navigation and overflight in the South China Sea. In fact, the ministers said that they are worried over any action that includes militarization of disputed features in the South China Sea, as they could destabilize the situation. Therefore, they mentioned that a peaceful resolution of conflict is necessary, based on the United Nations Convention on the Law of the Sea (UNCLOS), opposing to the use of force or coercion.

Providing his comment on the meeting, Mr. Shanahan said that a cooperative, regional security network that supports common goals is crucial across shared domains and in defence of shared principles. He also urged however for nations to look beyond the present and envision possibilities for the future.

As for China's Defence Minister General, Wei Fenghe, he criticised the US for its naval operations in South China Sea, but noted that conflict or war between the two countries would be a disaster. 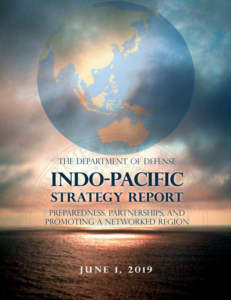