Watch: Surge in wave and tidal energy activity expected in 2020

Ocean Energy Systems (OES), an intergovernmental collaboration between countries to advance energy research, issued its annual report for 2018 noting that ocean energy progresses at a policy level within a global energy market that is seeing significant change, while the imperative and drivers for renewable energy continue to increase.

OES is the short name for the Technology Collaboration Programme on Ocean Energy Systems under the International Energy Agency (IEA).

The collaboration seeks to advance research, development and demonstration of technologies to harness energy from all forms of ocean renewable resources for electricity generation, as well as for other uses, such as desalination, through international cooperation and information exchange.

The Annual Report for 2018 presents an overview of progress made by the OES, including summaries of new, ongoing and recent projects, as well as updated country reviews prepared by the Delegates.

In 2018, the US DoE announced funding of $25m to support 12 next-generation marine energy technologies as well as enabling projects. In the UK, Orbital Marine Power concluded testing of their 2MW turbine and successfully raised £7m from 2,300 individual investors for a next generation device.

In Europe there was further consolidation around three-bladed horizontal axis tidal turbines with vacant opportunities in France and beyond being actively pursued by other developers. In the southern hemisphere Australia is re-engaging with wave energy following the opening of Albany test site, led by Carnegie Clean Energy.

“At a policy level ocean energy progresses within a global energy market that is seeing significant change. The imperative and drivers for renewable energy continue to increase whilst further downturns in the prospects for nuclear energy in key ocean energy markets are increasing headroom for low-carbon technologies,

However, globally we are still waiting on clear market signals for ocean energy projects. Such market signals are vital for the industry to progress towards commercialization. In terms of the OES, 2018 saw progress made on a number of strategic tasks. 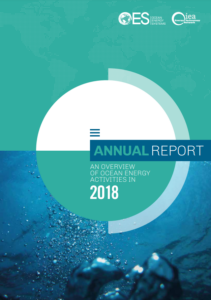