As part of its commitment to energy transition, the Port of Antwerp inaugurated the first solar concentrator farm in the European process industry. This energy technology generates eco-friendly heat from concentrated sunlight that can be used by industrial companies. The plant was installed for Adpo by the Genk-based energy company Azteq as part of a pilot project co-financed by the Flemish government.

Azteq has in the past few months installed a CST farm with 1100 m² of parabolic reflectors on the site of the logistics company Adpo (Antwerp Distribution and Products Operations) in Beveren.

Until now Adpo has used gas to produce the steam that it uses for cleaning and heating tanks and containers. This requires temperatures of more than 140°C, well within the capabilities of CST technology.

The CST farm that will replace 500 MWh of gas consumption annually is installed above the company's car park, above a railway line and underneath a high voltage line, thus providing an excellent example of double use of ground area.

The solar reflectors, each 5 m long and installed in lines of 120, follow the path of the sun and focus the incident sunlight on collector tubes. The plant is the first industrial CST project in Europe.

The plant in the port of Antwerp forms part of a project in which three pilot installations with solar reflectors are being set up in Flanders.

The three plants in Beveren, Ostend and Genk respectively will generate between 1,390 and 1,260 MWh of eco-friendly heat annually.

Between them, these plants will cost a total of 1.425 million euros, of which 819,000 is being financed by the Flemish government.

Earlier in 2019, the Port of Antwerp revealed plans to become a Multi-Fuel Port by 2025, meaning that, in addition to conventional fuels, alternative, more sustainable fuels can also be made available. It also informed it plans to launch a hydrogen bunkering station within 2019.

As Port of Antwerp we have a pioneering role to play in the energy transition. Together with industry we are working to reduce CO2 emissions and make the transition to alternative energy sources, so as to become a CO2-neutral port. We aim to accomplish this by means of ambitious transition projects, using methanol, hydrogen, wind power etc. We want to be a testbed for technological innovation that helps us on the way to a sustainable future. I am therefore proud that this promising technology is being tested first in Port of Antwerp, 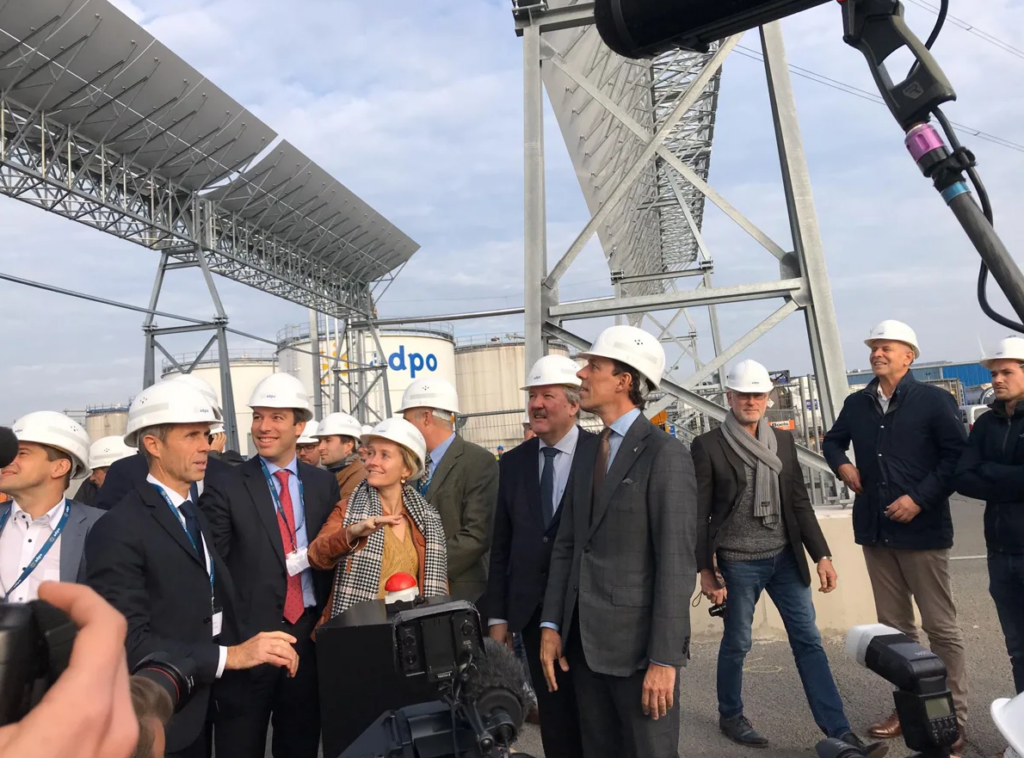 Industrial companies normally obtain heat for their processes from combustion of fossil fuels such as natural gas.

Concentrated Solar Thermal energy (CST) is an innovative technology in which sunlight is concentrated by parabolic mirrors and so converted directly to heat.

The temperatures reached can be as high as 400°C, thus providing high-grade heat that can be used in industrial processes.

The technology produces three times as much energy per installed square metre than a photovoltaic system. Furthermore the heat can be stored in insulated containers so that it is also available for use at night.

The technology is an entirely eco-friendly alternative for industrial heating requirements and so can make a significant contribution toward reducing CO2 emissions.