by The Editorial Team
in Arctic, Videos
FacebookTwitterEmailLinkedin

A study issued in the journal “Geophysical Research Letters” informs that what has been the oldest and thickest Arctic sea ice has begun disappearing, twice as fast in the rest of the Arctic Ocean, because atmospheric winds in north of Greenland transfer sea ice to other parts of the Arctic.

Specifically, the study highlights that the ice mass in the area, which has been the thickest sea ice and was the last place that scientists thought would lose its ice cover, is now experiencing a “fatal” decline twice as fast as ice in the rest of the Arctic.

Typically, ice covering the Arctic is one to four years old; Thin, young ice is easier to melt in future summers, and what remains is only a 2,000-kilometer (1,240-mile) arc of ice, stretching from the western Canadian Arctic Archipelago to Greenland’s northern coast.

On the contrary, in the part of the Arctic that scientists call “Last Ice Area”, sea ice is more than five years old and can be more than four metres thick.

The study states that although the Last Ice Area includes two sub-regions where ice thickness  fluctuates by 1.2 meters (four feet) from year to year, the ice is becoming thinner and thinner in these two sub-regions, resulting to a 1.5-meter (five foot) loss of ice since the late 1970s.

… sea ice within the LIA is highly dynamic, with a peak‐to‐peak seasonal amplitude in thickness of 1.2 m, a value of the same order as the loss in thickness that has occurred since 1979. This result implies that the LIA is losing ice mass at twice the rate seen in the Arctic Ocean as a whole,

For wildlife who rely on sea ice for survival, the Last Ice Area offers a sanctuary and is the final place they can retreat to in a warming world.

In light of the severity of climate change and climate warming, many industries across the world are making steps to a more sustainable future in protection of the environment. Fighting for balancing the climate in the Arctic, the Arctic Council and the Arctic Economic Council conducted their first joint meeting in Reykjavik, bringing together stakeholders to discuss the future of Arctic, marine transportation and blue economy.

Overall, the Arctic has been coping with many difficulties these days following climate change and global warming; In essence, a video was published by NASA and the National Snow and Ice Data Centre highlighting that Arctic ice reached its minimum extent of 1.60 million square miles (4.15 million square kilometers) on 18 September, which is the second lowest summertime extent in the satellite records. 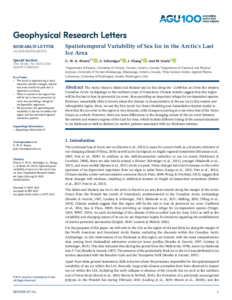