Watch: Maritime unprepared for three emerging technologies in next 10 years

by The Editorial Team
in Smart, Videos
FacebookTwitterEmailLinkedin

The maritime industry feels unprepared for digitalization was the main finding of Global Maritime Issues Monitor 2018 report, launched in conjunction with the Forum’s Annual Summit in Hong Kong in October 2018. The survey shows that ‘big data’, ‘blockchain technology’ and the ‘Internet of Things’ are expected to have the most significant impact on the sector in the next ten years.

The Global Maritime Issues Monitor 2018 is based on a survey of senior maritime leaders from more than 50 countries on their perceptions of 17 major issues, specifically on their impact and likelihood and the industry’s preparedness for them.

This deep dive on digitalization looks closely at a range of topics related to existing and emerging digital technologies in the context of the maritime industry.

From the top three issues both in impact to seaborne trade and likelihood of occurring over the next ten years, ‘big data’ is seen as having the highest potential impact and likelihood. In perceived impact, ‘blockchain technology’ follows closely in second place, and the ‘Internet of Things’ comes third, with these two issues switching places when it comes to the likelihood of their occurrence.

If the higher level of preparedness for the three above mentioned technologies is due to their gradual integration into maritime business models, this assumption could also explain why less importance was accorded to ‘artificial intelligence’ and ‘autonomous technology and robotics’. 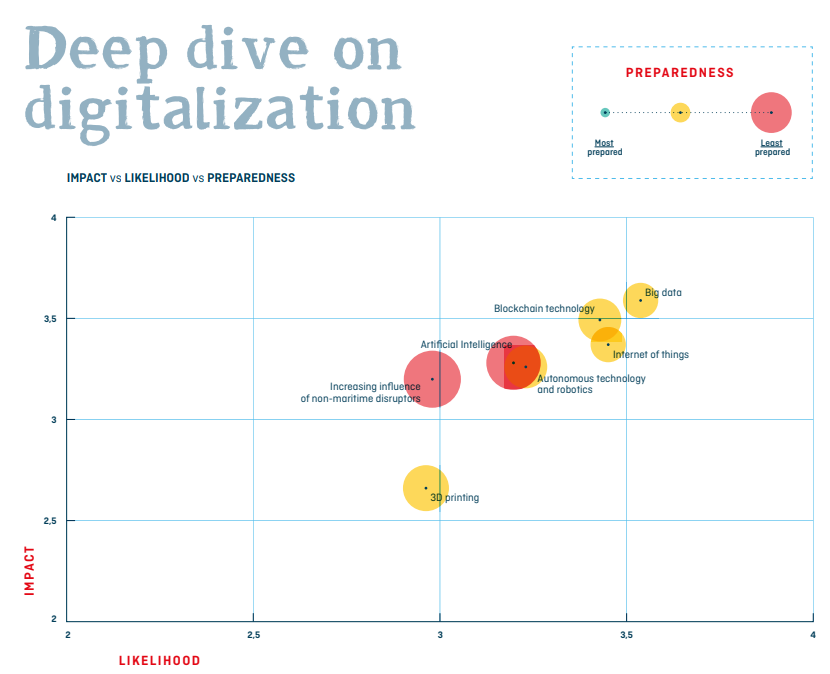 These are digital technologies where concrete applications in maritime are mostly still in the development phase, which makes them less likely to have a significant impact on global seaborne trade over the next ten years.

This analysis of the situation seems to be confirmed by various stakeholders from the industry. The application of big data, Internet of Things and blockchain technology is clearly on its way to upgrade some parts of our daily operation and decision-making process,

As for autonomous technology and AI, he states that they will have a significant bearing on the industry, but only in the longer term.

Finally, ‘3D printing’, the last digital technology included in the survey, received the lowest impact and likelihood rating, while also figuring among the top three issues the industry feels unprepared to face.

Indeed, it could very well be that, at least in the near future, 3D printing will mainly be relevant for prototyping or specialised applications, and therefore not a significant threat to traditional manufacturing processes and trade flows.

Additionally, it is unlikely that 3D printing will have a major impact on the transport of raw materials, which after all makes up a very large part of global maritime transport.