The Environmental Justice Foundation (EJF) filmed illegal activities as they took place at sea and undertook first-hand monitoring at ports and data analysis to present the full catastrophic scale of this form of organised crime.

Stolen at Sea: The Chinese Trawlers Driving the Collapse of Ghana’s Fisheries from Environmental Justice Foundation on Vimeo.

'Saiko' is a form of illegal fishing, where foreign trawlers target the staple catch of Ghanaian canoe fishers and sell this stolen fish back to local communities at a profit. For the first time, a new report has released an estimation of the true cost of saiko.

The trawlers themselves are run almost exclusively by Chinese operators, who use Ghanaian ‘front’ companies to bypass laws forbidding any foreign ownership or control of industrial trawl vessels flying Ghana’s flag. EJF has revealed that over 90% of industrial trawlers licensed in Ghana are linked to Chinese ownership

What is more, the saiko catches in 2017 were worth US$ 40.6 - 50.7 million when sold at sea, and US$ 52.7 - 81.1 million when sold at the landing site, the report estimates. Much of this money passes straight into the hands of the Chinese fishing companies, and out of Ghana.

Saiko also leads to job losses. The specially built 'saiko canoes' that take the fish from the trawlers back to ports such as Elmina carry up to 450 times the average catch of the fishing canoes and are operated by only a few individuals. The report estimated that while canoe fishing offers direct employment for around 60 fishers for every 100 tonnes of fish, saiko means only 1.5 jobs per 100 tonnes - 40 times less.

Saiko is precipitating the collapse of Ghana’s staple fish stock and with it, poverty and hunger for its people. Chinese trawlers are making millions of dollars in an illegal trade which makes up over half of the fish caught by industrial boats in Ghana. This is an ecological crisis that is bringing about a human one as local communities are deprived of livelihoods, income and food security.

Explore more in the following report. 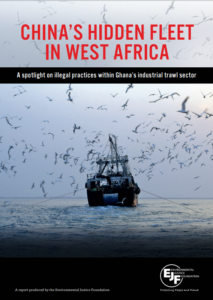