by The Editorial Team
in Arctic, Ports 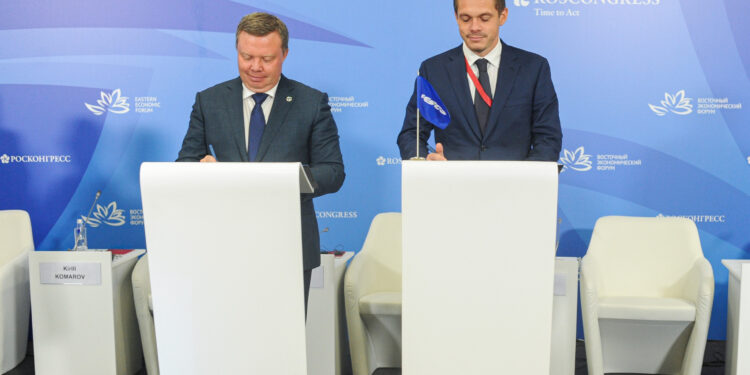 FESCO and Atomenergoprom plan to establish a transport and logistics hub at the Vladivostok Commercial Sea Port, within the framework of the project by the Rosatom on the Euro-Asian transit of container cargo.

The Eastern Transport and Logistics Hub (TLU) is intended for transshipment of containers between arctic-class and feeder vessels.

The Eastern TLU will also become part of the Euro-Asian Container Transit project, which involves development of container cargo transportation on route East Asia-Northwestern Europe, including via the Northern Sea Route, within the framework of which it is planned to create two transport and logistics hubs in the west and in the east of Russia and to organize container shipments between these hubs by ice-class vessels.

To achieve these goals, the parties plan to create a port infrastructure on the territory of Commercial Port of Vladivostok. This will increase capacity of the port and attract additional cargo traffic to the route.

A logical step in the development of these two directions will be the establishment of the Eastern Transport and Logistics Hub. In cooperation with Rosatom, we will be able to strengthen the capacities of Commercial Port of Vladivostok, which is already one of the most advanced port enterprises in Russia

said Andrey Severilov, Chairman of the Board of Directors of FESCO.

Moreover,  Kirill Komarov, Director of Atomenergoprom, added that the Euro-Asian Container Transit project aims at creating an additional global transport route between Europe and Asia to increase the stability of global logistics system and integration of Russia into world trade.