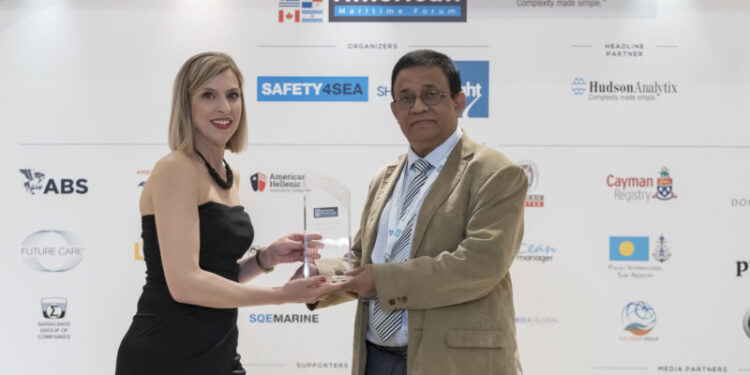 SAFETY4SEA, in collaboration with SHIPPINGInsight, is pleased to announce that Viswa Lab has received the 2019 Hellenic American Maritime Innovation Award, sponsored by SQEMARINE, at a gala dinner and award ceremony which successfully concluded on May 29th at Megaron Athens, The Banqueting Hall, the evening on day one of the inaugural Hellenic American Maritime Forum, in Athens.

It is no coincidence that Viswa Lab is renowned as a ‘problem solving lab’ since it is in company’s DNA to make a difference and bring value through excellence in service, support and with integrity in all dealings.

Viswa Lab has a worldwide reputation as a ‘Problem Solving Lab’ and ranks #2 globally in bunker fuel testing. Viswa Lab is one of the only three IMO approved labs for testing. Also, the lab has been successfully accredited by ISO 17025 & ISO 17020. Viswa Lab currently serves over 8,500 ships and 650 customers. The lab returns the analysis results on the same day it receives the samples. Viswa Lab has a global presence with four labs in US, Singapore, UK and UAE. For European customers, it has an Administrative office and warehouse in Antwerp.

Other winners of the 2019 HAMF Awards are: Star Bulk Carriers Corp. for the Dry Bulk Operator Award, Panama Maritime Authority for the Maritime Centre Award, Wärtsilä for the Investment in Shipping Award, US Coast Guard for the Guardians of Industry Award, Mrs. Angeliki Frangou, Chairwoman & CEO, Navios Group, for the Visionary Award, Mr. Nicky A. Pappadakis, Past Chairman of Intercargo, for the Maritime Advocate Award and Adm. (USCG Ret) Thad William Allen for the Lifetime Achievement Award.