Vessels’ speed limits to have positive impact on the environment

A newly-launched study focuses on the importance of reducing shipping emissions and its benefits in favour of humans’ health, nature and the environment by reducing vessels’ speed. The report highlights that a 20% reduction in vessels’ speed would decrease GHG emissions, as well as curb pollutants that pose great risks on human health, as black carbon and nitrogen oxides.

Accordingly, this study launched by campaign groups Seas at Risk and Transport & Environment is based on existent research that suggests that slowing down ships will have positive effects on curbing GHG.

Up to now, BIMCO’s Deputy Secretary General, Lars Robert Pedersen has proposed four options, according to which the shipping industry could measure and accurately check the imposed speed limits, focusing on the pros and cons of each option and adding that only one option is ideal and can achieve what the industry needs.

The fourth option, which according to Mr Pedersen is the ideal one, requires a technical approach and understanding.

The report’s proposed 20% speed reduction would also play a role in reducing underwater noise by 66% and reduce the chances of whale collisions by 78%. Underwater noise has a harmful impact on the marine environment and the species living in it.

As many are the efforts taking place in protecting the environment and building a greener and more sustainable future, BBC reports that UN negotiators are to meet in London this week to think of proposals to limit vessels’ speeds.

Moreover, the report also discusses a variety of impacts of a speed cut such as on air pollution and marine noise.

Additionally, speed reduction leads to reduction of fuel consumption by the vessel’s main engine; Thus, when a vessel reduces its speed by 10%, main engine power demand is reduced by 27%, but since ships cover less distance when they slow down, the reduction in energy per unit of distance is 19%.

The study addresses that information on the relation between vessel speed and CO2 emissions today “tends to be derived from modelling exercises and will be influenced by a number of factors including the model used, input data, assumptions made and ship types examined.”

The report reveals that reducing ships’s speed by 20% will also cut sulphur and nitrogen oxides by around 24%. In the meantime, there are also significant reductions in black carbon, which are tiny black particles contained in the smoke from ship exhausts.

The reduction on black carbon will also have a positive impact on the Arctic region’s environment, as when ships burn fuel in the icy northern waters, the particles often fall on snow, and restrict its ability to reflect back sunlight, which accelerates heating in the Arctic region.

In addition, another challenge is whale collision. With sound traveling at a much faster rate underneath the water, whales can communicate better. However, the noise that vessels produce can interfere with the audio frequencies whales use for communication. Therefore, to deal with this challenge, scientists from the Benioff Ocean Initiative and Woods Hole Oceanographic Institution have created a a hydrophone (underwater microphone), in order to listen for whale traffic in the Santa Barbara Channel.

Thus, the study notes that

This speed limit would cut underwater noise by 66% and reduce the chances of whale collisions by 78%.

In the meantime, the study presents a table explaining that as faster as a vessel sails, it has many pose possibilities to fatally injure a whale.

Also, concerning the implementation of speed limits and its positive effects on the environment, in an exclusive interview, Dr. Harilaos Psaraftis, Professor at the Department of Technology, Management and Economics, Management Science Division of Technical University of Denmark (DTU), proposed that a direct step to curb emissions and implement speed limitations could be imposing a bunker levy. A levy would mean that polluters will be “forced” to pay, which would lead not only to GHG emissions reductions via slow steaming, but also to the development of energy saving technologies and low carbon fuels that are currently non-viable.

To explore more on the study, click on the PDF herebelow 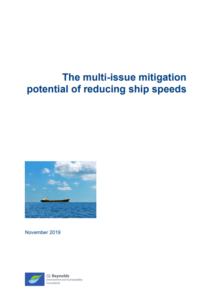