Vessel tracking globally with LRIT – How it works 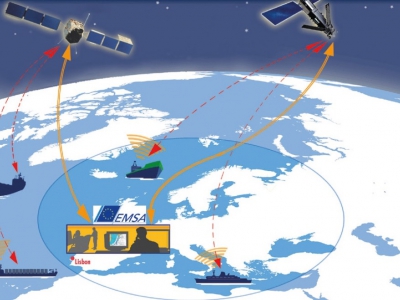 The long range identification and tracking (LRIT) system for ships aims to enhance security for government authorities. The European Maritime Safety Agency (EMSA) has produced a leaflet in order to understand LRIT and its potential benefits for maritime safety, marine environment protection, as well as search and rescue operations.

LRIT provides ship identity and current location information in sufficient time for a government to evaluate the security risk posed by a ship off its coast and to respond to reduce the risk if necessary.

An active and accurate long range identification and tracking system also has potential benefits in terms of maritime safety, marine environment protection, and maritime search and rescue. Accurate information on the location of the ship in distress, as well as ships in the vicinity that could lend assistance, reduces response time, supporting timely rescues and minimising pollution.

The LRIT system was set up under the auspices of the International Maritime Organisation (IMO). It aims to provide a global system for the identification and tracking of ships.The LRIT system is mandatory for all passenger ships, high speed craft, mobile offshore drilling units and cargo ships of over 300 gross tonnes, and has been in force since July 2009.

The system specifies that flag States should ensure that a ship transmits a minimum of four positions per day (once every 6 hours). LRIT information is stored and available for those users entitled to access it.

LRIT users include the following:

Port States may request information on those ships that have declared one of their ports as destination, irrespective of their location or flag

The international LRIT system receives, stores and disseminates LRIT information on behalf of all SOLAS Contracting Governments (Convention of Safety of Life at Sea – 1974 SOLAS Convention).

In October 2007, the Council of the European Union adopted a Resolution to set up an EU Long Range Identification and Tracking of Ships Cooperative Data Centre (EU CDC). The EU CDC is a combined effort of the European flag States, managed by the European Commission, through the European Maritime Safety Agency (EMSA). The Agency is in charge of the data centre’s technical development, operation and maintenance.

The EU CDC is one of the biggest data centres in the whole international LRIT system. It tracks over 8 500 ships, which generate a minimum of 200 000 position reports per week. At present, there are 37 member countries, EEA countries and Overseas Territories participating in the EU CDC. The EU CDC covers an estimated 25% of the world fleet subject to LRIT. In addition to tracking EU flagged ships, the EU CDC also provides Member States, on request, with the LRIT information of any third country vessel bound to, or sailing within, EU waters. So it is possible to track any ship within a 1 000 nautical miles zone of a participating State’s coastline, no matter what flag the ship is flying.

The EU CDC enables the identification and tracking of ships worldwide. It is an integral part of the wider international LRIT system. All participating States share a common interface to the International Data Exchange (IDE), so it is also possible to request LRIT information on ships flying the flag of a non-EU country. This means that depending on the type of user, a participating State can consult the position of any ship that is in the vicinity of its coastline or that is bound for one of its ports.

Future of the LRIT Sata Centre

All users (flag, coastal, port or SAR) of the EU LRIT Cooperative Data Centre have access to the user webinterface to be able to consult position reports and requestspecific positions of ships. This interface allows the ships tobe viewed graphically, and users can follow a particular shipor list of ships. There is the possibility to connect system to-system through an XML interface, enabling participating States to receive streamed LRIT data in their own nationalsystems.

EMSA has put in place an invoicing and billing system for the invoicing of costs associated with the use of the system and requesting of LRIT reports. This also enables theclearance of payments with other data centres worldwide.This system is operated by dedicated staff, who are responsible for the invoicing and financial management of the system. Certain aspects of the performance of the EU LRIT system, including this invoicing and billing system,are audited by the LRIT Coordinator, the International Mobile Satellite Organisation, acting on behalf of all SOLAS Contracting Governments.

Throughout the development of the EU CDC, EMSA was inconstant dialogue with the European Member States and the EEA countries, Norway and Iceland. An EU LRIT expert group gives valuable assistance, guidance and advice.This expert group, called the LRIT NCA Group, reviews the performance of the EU CDC and provides feedback on modifications and updates to the system.

Users of the EU LRIT system undertake training at both regional and national level to ensure users have all the relevant background to use the system. A detailed training package also enables participants to train others intheir government administrations to use the system. On an operational level, EMSA provides a 24/7 helpdesk for EU CDC users through its Maritime Support Services (MSS). The MSS supports a number of different maritime applications operated by EMSA, monitoring their performance and ensuring high level availability and quality control.

The most significant future development envisaged isthe integration of information from several maritimeapplications such as the EU CDC, SafeSeaNet and CleanSeaNet. The data will be available, according to user access rights, and pooled into one common interface allowing the user to view both short and long range ship tracking information as well as data on ships, their cargo,and other data contained in EMSA’s maritime applications.This will be achieved through a common integrated platform hosted in-house which will provide MemberStates and the European Commission with a comprehensive image of vessel traffic in the European Union and beyond.