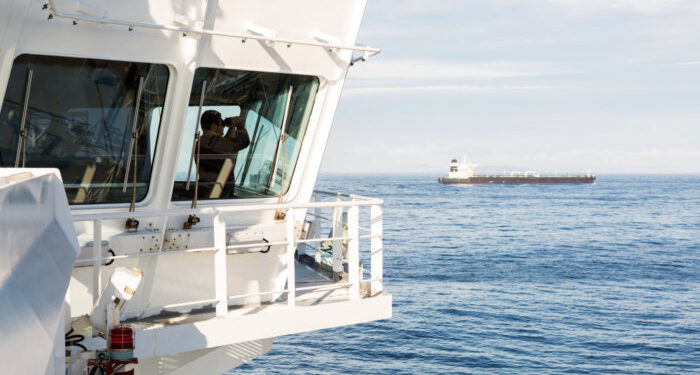 In its latest issue, CHIRP focuses on an incident when a tanker in ballast had to rapidly disembark because of bad weather, but eventually collided with a channel buoy, after the pilot left the bridge.

The reporter informed CHIRP that:

As the vessel completed its cargo discharge, a pre-departure bridge team meeting was held, and navigation equipment was tested. The Master/Pilot exchange was carried out in line with company standing instructions.

The vessel began its journey, leaving the berth and heading towards the sea. The ones on the bride were the two pilots, the Master, Chief Officer, OOW and the helmsman.

It should be noted that the pilotage from the berth to the fairway buoy was just over three hours. The pairs of buoys are distant every mile with a further mile from the final pair (No 1 buoys) to the Fairway buoy.

When the vessel sailed away from No. 2 buoys, the pilot left the bridge, after informing the rest of the crew on the bridge; that time, the vessel had surpassed the first set of buoys and before reaching the fairway buoy. As that time, the time was wind easterly 30-35kts gusting 50kts and the swell was reported as 2-3m; Then, the pilot advised the vessel to make a course of 221° after passing No.1 buoys in order to provide a good lee for a safe pilot disembarkation.

Following, the OOW left the bridge to help the pilot, whereas the Master and Chief Officer remained stable at their positions to monitor the vessel’s movement in the channel. Yet, no one replaced the OOW who had left.

Then, the team realized that the vessel was drifting and getting closer to buoy No. 1 to starboard. To counter the drift, the helmsman was ordered to alter the wheel hard to port, but as the vessel started developing port swing the wheel was then ordered hard over to starboard to counter the swing and maintain a course parallel to the buoy.

Our vessel slowly responded and swung to starboard. The bow passed clear of the buoy but No.1 buoy struck our starboard side, where it fouled and was dragged along at the ship’s side for 2.5 miles before coming free

The highlights of the situation are:

A subsequent in-water survey found only minor propeller damage which did not affect the vessel’s operational capability.

In light of the incident, CHIRP resulted to the Lessons Learned, as presented below: