Vessel detentions in Indonesia due to ‘illegal anchoring’

by The Editorial Team
in Alerts, Detentions 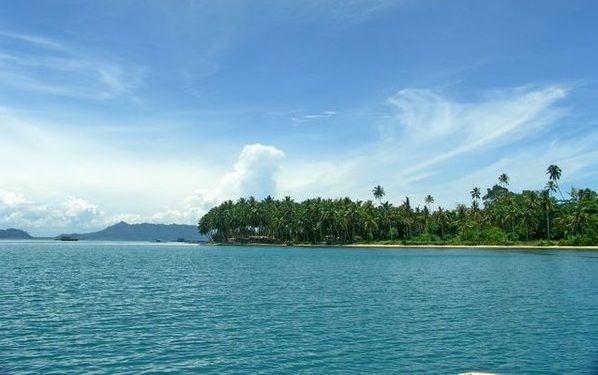 According to a recent release by the North P&I Club,  its SPICA correspondents in Indonesia informed about an increasing number of vessels being detained by the local authorities while they are at anchor in the waters around the island of Bintan, which is a popular place for vessels to “waiting for orders” because it is close to shipping lanes, and believed to be OPL (Operational Port Limited) Singapore. However, these waters are within Indonesian territorial waters where local regulation apply.

A recent change of the territorial limits in the eastern part of the Strait of Singapore, between Indonesia and Singapore, has prompted local authorities to rigorously enforce the regulation, leading to vessel detentions and fines in case of violation.

In 2014 an agreement was signed between the two countries which was ratified after 3 years to define the boundary spanning; a 9.45-kilometre stretch between Changi and Batam. This is the third maritime border treaty between the two countries along the Singapore Strait. In 1973, both countries agreed on the maritime boundary along the central part of the waterways while on 2009, an agreement on boundaries in the western section was reached.

Namely, the recent ratification of the treaty resulted in a delimitation; as such, while previously, vessels were anchoring around the island of Bintan, Indonesia, waiting for order, now these are subject to detention by the Indonesian Navy for illegal anchoring.

According to local regulation, when a vessel is located within territorial waters, its clearance procedures are subject to Indonesia even if only the vessel is anchored and is not planning to conduct other operations (ie. Crew change, cargo operation, supplies). Moreover, an agent must be appointed.

Up until now there is no procedure in place for dealing with such arrests. This has caused confusion and delays because of a lack of information or direction from the Indonesian authorities.

However, the Indonesian Navy has decided to change its enforcement policy and therefore any violation may lead to vessel detention, resulting to considerable delays, fines or it may be even considered as a criminal act.

Indonesia now requires from ships located inside their territorial waters that are not on innocent passage, for example anchoring, conducting a crew change or STS operations, to be cleared in and out of Indonesia.

As informed,  activities such as crew change and cargo operations within Indonesian waters are only allowed for Indonesian shipping companies with Indonesian flagged vessels manned by Indonesian crew.

The Indonesian Navy has been strictly implementing such laws and this has included the reported use of live ammunition towards commercial vessels.

Considering that the typical reasons for the infringement are either misunderstanding of where territorial waters of Indonesia legally begins and ends or local laws  requirements, SPICA advises the following:

‘’Once a vessel is southbound in the Malacca Strait (past Port Klang) and through the Singapore Strait until entering the South China Sea, either Malaysia, Singapore or Indonesia will claim territorial waters. It has perhaps been (mis)understood in the past that there are waters in these Straits not claimed by any of the three countries. This would be a mistake.

There are no OPL anchorages in the area. Only if a vessel is passing through territorial waters without stopping, will it not be subject to the jurisdiction. The right of “innocent passage” is secured in article 17 of the United Nations Convention on the Law of the Sea (UNCLOS). The passage, however, needs to be continuous and expeditious (art. 18.2). In practice, this means the vessel cannot stop except when forced to incidentally stop for reasons of safety, danger or distress. Ship-to-Ship (STS) operations is a good example of this. It is not an incidental stop and the right of innocent passage is ‘lost’. Slowing down (crew change or taking stores) also disqualifies the right of innocent passage.

This also applies if the vessel is only anchored and has no intention of ‘interacting’ with Indonesia, such as cargo operation, taking supplies, crew change, etc. An agent needs to be appointed. It has often been overlooked that activities such as transhipment, crew change and cargo operations within Indonesian waters can only be performed by an Indonesian shipping company, operating an  Indonesian flagged vessel and manned by Indonesian crew. Transhipment activities (including launch boats carrying stores or crew) are categorised as activities that may violate Indonesian Law No. 17 of 2008. The Indonesian Navy have recently been upholding this rule strictly. We have been made aware that live ammunition has been fired by the Indonesian Navy towards a commercial vessel for an undisclosed reason’’

As such, operators are urged to exercise vigilance when approaching the eastern part of the Strait of Singapore and do not anchor in or around Indonesia territorial waters without confirmation from a local agent. In case any issues arise, operators should contact their P&I Club or local correspondent immediately.

You may find herebelow  the SPICA announcement on the subject: 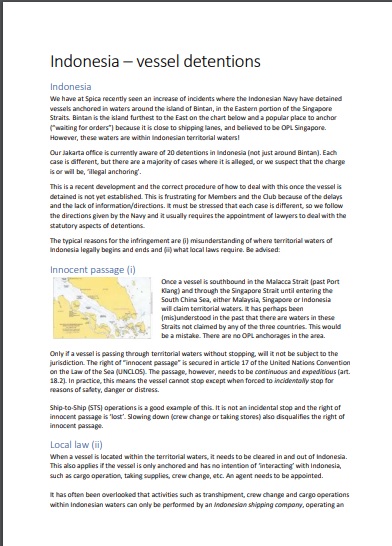