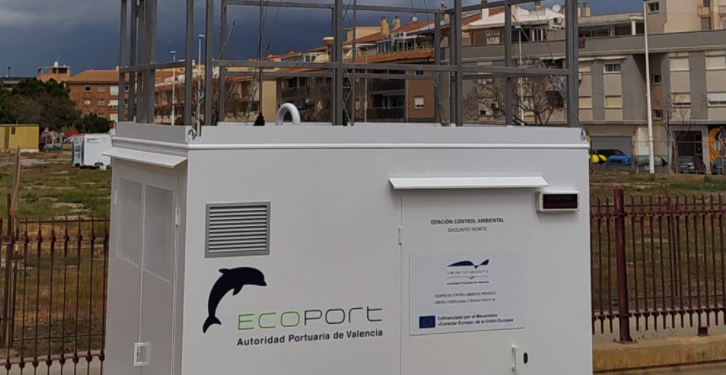 Namely, the port  has three environmental control stations that collect data from eight different gas and particle meters to determine air quality. The stations installed in the Port of Vaència are connected to the Generalitat Valenciana’s Air Pollution Monitoring and Control Network, and the Sagunto station will join in the near future.

As explained, the air quality of the ports of València and Sagunto in recent months has been good according to the data from the environmental control booths that can be checked in real time on the Valenciaport website.

Specifically, these facilities are located, following the criteria and indications of the technicians of the Centre for Environmental Studies for the Mediterranean (CEAM), on the esplanade of the old Turia riverbed and on the Transversal de Poniente dock with Levante in the Port of Valencia and in the northern area in the Port of Sagunto.

The three control facilities are equipped with the latest technology for measuring and controlling atmospheric pollutants. They have five gas analysers that measure the concentration of sulphur dioxide (SO2), nitrogen oxides (NO2/NO/NOx), ozone (O3), carbon monoxide (CO) and PM10 and PM2.5 particles. In addition, they include pollutant gas and particle parameters (it collects 8 different elements) and meteorological indicators (another 8 data sources), compared to other booths that only include the measurement of PM10 and PM2.5 particles.

In addition to this technology, they are also a meteorological station, for observation and recording of wind speed and direction, rainfall, solar radiation, temperature, relative humidity and barometric pressure, and include sound level meters to measure the port’s acoustic levels.

The cabins of the Port Authority of Valencia (PAV), which have never been disconnected since they were installed and which have not registered any incident, provide information on the quality of the air in the surroundings of the port enclosures, monitor the air in real time, which makes it easier to know the state at all times and improve the planning of port operations if necessary to control emissions.

The two cabins in the Port of Valencia are also connected to the Air Pollution Monitoring and Control Network of the Generalitat Valenciana and the Sagunto station will join in the near future.

This initiative is part of the GREEN C PORTS project coordinated by the Valenciaport Foundation and co-financed by the European Union, an initiative in which several European ports participate to test innovative technologies such as IoT, Big Data or predictive analysis using artificial intelligence models. These new cabins complement the PAV’s entire surveillance network for the control of environmentally friendly port facilities.