With the shipping industry experiencing more and more developments, Russel Chew, Executive Chairman, NanoVapor, gives his opinion on nanotechnology. Mr. Chew highlights that this technology can offer safer and faster solutions that were not thought possible with conventional methods.

For as long as oil and petrochemicals have been in use by transportation, safely managing their highly flammable, toxic, and environmentally damaging vapors has been an ever-present challenge. Even with increasing emphasis on safety procedures and better training, these invisible and dangerous vapors continue to result in the loss of life and property. But now, new nanotechnologies can provide safer and faster solutions that were not thought possible with conventional methods. These new technologies are now becoming available for marine and other transportation modes, so they too can realize the dramatic improvements in workplace health and safety made possible with more effective suppression of these dangerous vapors in confined spaces.

In the marine transportation business, safety and time often work against each other as operators seek to improve overall efficiency by reducing the vessel downtime related to unscheduled and scheduled maintenance, repairs, and inspections. This time pressure can lead to inadvertent but deadly lapses in the checks and balances that are designed into every operator’s safety procedures that deal with these hazardous vapors. Because nanotechnologies can quickly suppress vapor formation, it can address these risks by significantly reducing the time needed to achieve safe vapor levels and maintain these safe levels long after it has been applied. 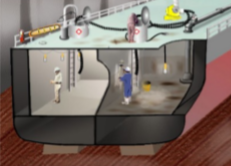 When gas freeing a fuel or product tank, nanotechnology can be used to create a molecular barrier on any surface where oil, fuel, and other petrochemicals are present. This molecular barrier is so thin that only a few ounces of engineered nano-suppressant molecules would needed to fully suppress vapor concentration to safe levels even for large tank volumes. Since such small quantities of nano-supressant would leave no measurable residue behind, the need for costly and time-consuming recovery operations is minimized or eliminated.

To compare the effectiveness of suppressing vapors using nanotechnology, a live side-by-side degassing demonstration was performed on the wing fuel tanks of a Boeing 737 aircraft. Prior to degassing, the jet fuel in each of these fuel tanks was drained using normal procedures, leaving the usual puddles of fuel trapped by the numerous internal structures within the tank. The wing tank on one side was then degassed using nanotechnology, while the tank on the other side was simultaneously degassed using conventional air ventilation. The graph in Figure 1 shows the time it took nanotechnology to suppress the fuel vapors to the safe level of 100 ppm (13 minutes) as compared to normal air ventilation (more than 7 hours). 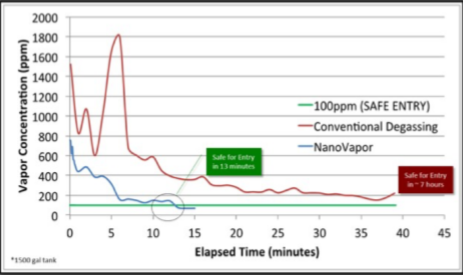 In terms of safety, it’s also important to know that nano-molecular vapor suppression continues long after the suppressant delivery system is removed. The graph in Figure 2 below shows that the vapor concentration stayed at safe levels after the delivery system was removed, while the concentration in the tank with air ventilation quickly increased above hazardous levels. 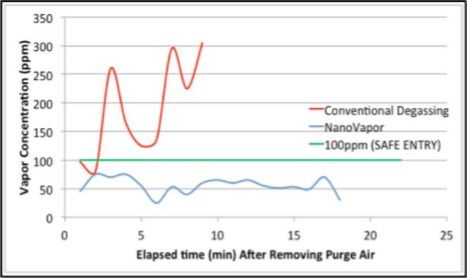 Vapor suppression using nanotechnology produces similar results at larger scales with time savings of 70% on a 30,000-bbl tank barge, even when constrained by a low-flow vapor recovery system. Savings can be further increased by optimizing for specific product type, tank size, geometry, venting configurations, and flow rates of the vapor recovery systems.

Because there are no reactive chemicals or inert gases need be used with nanotechnology, breathable air is never displaced and normal oxygen levels are maintained throughout the confined tank space. This also results in a more environmentally friendly solution, as no additional hazardous waste is created in this gas freeing process.

THE BUSINESS OF SAFETY AND SUSTAINABILITY

For ship and barge operators, incorporating nanotechnology into its normal gas freeing procedures can represent a win-win solution by improving safety and efficiency, while saving the cost of downtime related to the typical lengthy gas freeing process. This time savings also translates directly to reducing atmospheric emissions.

Currently, nanotechnology vapor suppression is known to be effective for hydrocarbons categorized as C5 or higher, including HFO, LSFO, and other refined products. Commercial nanotechnology suppression systems have been in use by other industries, designated as an international Best Practice Standard for degassing underground storage tanks by one of the largest oil companies in the world, and successfully adapted for use on large aircraft, barges, and above ground storage tanks.

Because oil and petrochemicals will be used in transportation for the foreseeable future, operators will be continually challenged by the risks inherent to managing hazardous volatile organic vapors. From preventing workplace accidents to climate change, industry leaders must proactively seek out and adopt new technologies to become even safer, ever more efficient, and demonstrate long-term sustainability.

Mr. Chew previously served as Managing Partner at NEXA Capital Partners providing Investment Banking and Advisory Services for Aerospace and Technology companies. Before NEXA, Mr. Chew was President & Chief Operating Officer of JetBlue Airways, responsible for all operations, including Flight Operations, Maintenance & Engineering, Airport Operations, Inflight Services, Safety and Compliance, Security, and Information Technology. He also served as Chief Operating Officer for the FAA. As head of the Air Traffic Organization, he was responsible for safe and efficient air traffic control operations across the United States, all capital acquisition programs, and research, engineering, and development. Prior to his FAA service, Mr. Chew was Managing Director of System Operations at American Airlines. During his 17 years at American, he held positions of increasing responsibility including managing their worldwide operation, strategic planning for operations and technology, technical operations, regulatory requirements, and information technology for flight operations. Russ holds a Doctoral Degree from University of Southern California following undergraduate studies at Stanford University.

Moreover, SAFETY4SEA Team met with Mr. Russel Chew, Executive Chairman, NanoVapor, at CMA Shipping 2019, for an exclusive video interview on key applications and benefits of nanotechnology in the maritime industry.