USCG: Verifying the correct arrangements of handhold stanchions is crucial 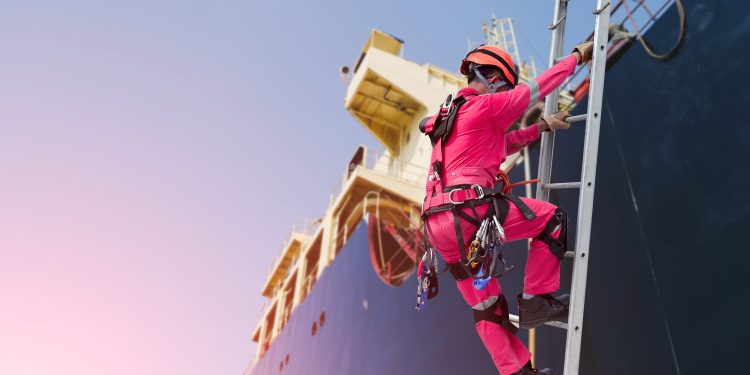 United States Coast Guard (USCG) issued a marine safety alert on the importance of verifying the correct arrangements of handhold stanchions at the embarkation gate.

As disclosed, the safety alert follows an investigation involving a fall from a pilot ladder where the handhold stanchions terminated without being rigidly secured to the deck. This resulted in a gap on the handhold stanchion in an area where an embarking pilot could reach up to pull themselves onto the vessel.

The safety alert states that the arrangement on the vessel in question appeared to have been a modification. It is likely that this was done to enable the spreaders on the pilot ladder to pass under the handhold stanchions,  rather than having to run them over the vessel’s railing when deploying or retrieving the pilot ladder.

SOLAS is clarified by IMO Resolution A.1045 (27) to indicate that each handhold in a gateway arrangement should be rigidly secured to the ship’s structure at or near its base:

Vessels calling at US ports should consider the increased possibility that pilot boarding arrangements may be an area that USCG inspectors focus on during PSC inspections.

In addition, last month, CHIRP Maritime published its latest ‘Feedback Maritime’ Magazine in the context of providing lessons learned and raising awareness of safety issues. Among others, CHIRP highlights an accommodation ladder failure whilst the ladder was being recovered after a pilot had boarded and discusses important issues related to maintenance, design, and human factors.