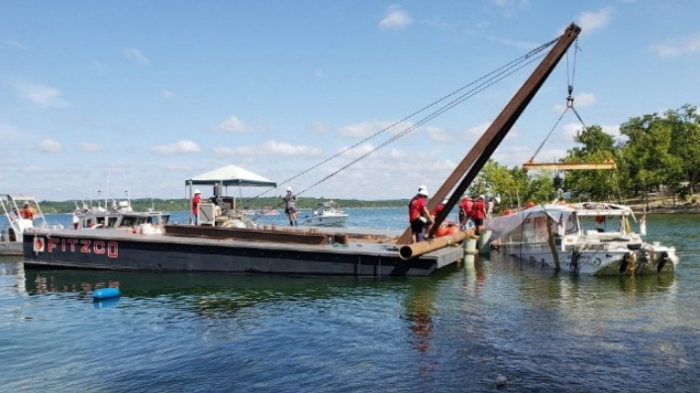 Salvage of the sunken duck boat in July 2018 / Credit: USCG

In an official hearing on Commercial and Passenger Vessel Safety on Thursday, the head of the US National Transportation Safety Board's Marine Safety Office critiqued the US Coast Guard's willingness to bolster safety rules for passenger vessels, on the aftermath of three fatal incidents involving small vessels in US waters.

Speaking at the hearing, Brian Curtis, the director of the NTSB Marine Safety Office, said small passenger vessel safety continues to improve by the implementation of the safety recommendations already issued, but the board has investigated at least three significant accidents involving small passenger vessels in recent years, “which indicates that there still are significant safety gaps to be addressed.”

The remarks were made with respect to:

-the fatal sinking of the amphibious passenger vessel, Stretch Duck 7 in July 2018, on Table Rock Lake near Branson, Missouri, where 17 of the 31 people onboard died.

-the fire aboard the small passenger vessel Island Lady near Port Richey, Florida, on January 14, 2018, that killed one passenger died and injured 14 others;

- the more recent fire of the 75-foot commercial diving vessel Conception, while anchored in Platts Harbor, off Santa Cruz Island in California, on September 2, 2019, which killed 34 people and marked the largest loss of life in a US marine casualty in decades.

The NTSB is not a regulatory agency promulgating standards, but it produces safety recommendations. As the investigation on the duck boat sinking is still open, the NTSB issued again recommendations to the USCG, last week, to require sufficient reserve buoyancy for DUKW amphibious passenger vessels, and to require the removal of canopies, side curtains and their associated framing, while underway, for those without sufficient reserve buoyancy.

Speaking at the hearing, Rep. Salud Carbajal, whose district includes the site of the Conception accident, questioned both USCG and NTSB on safety regulations and next steps related to the Conception boat fire.

While I want to recognize the Coast Guard men and women for just doing a heroic job day in and day out on their mission—and I have a number of servicemembers in my district that do an outstanding job—I must say that, when you look at the track record of implementing the NTSB’s recommendations, it is not a good track record…What actions has the Coast Guard taken to make sure those recommendations are implemented, and why have they not been implemented to date?