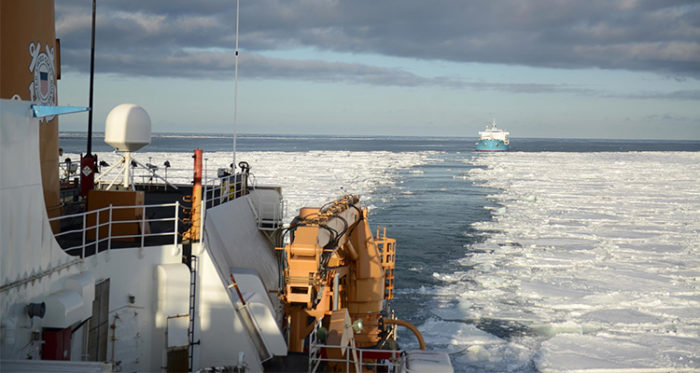 As global warming and ice melting opens new shipping routes in Arctic, the head of the US Coast Guard announced that it may soon get funding for a new heavy icebreaker. The US has currently two operational icebreakers, the Polar Star, which is heavy but more than 42 years old, and the Healy which is a medium one.

During 2018 the US Congressional Research Service (CRS) had issued an updated report on the Coast Guard Polar Icebreaker Program which expected to see an increase on icebreakers with 3 new heavy polar ones. Also the report foresaw the construction of the first new heavy polar icebreaker to be scheduled to start in 2019 with entry into service in 2023.

Namely, according to USCG Commandant Karl Schultz, icebreakers help with scientific researches and operations in the Arctic and Antarctic, that focus on vast natural gas, oil, mineral, fish, and fresh water resources.

Also, Russia has 40 to 50 icebreakers in its possession that are rescue-vessels for other ships, supply bases and can reach oil spills in crucial polar conditions.

Moreover, even if Washington takes part in forums such as the Arctic Council, it needs to make sure that it owns the right equipment. Commandant Karl stated that China declared itself as a 'Near Arctic State' this year and that it expands its icebreaker fleet.

While President Donald Trump’s administration has gathered $750 million for an icebreaker, it is yet to be discovered if the funding will survive in Congress since it has plans to also fund the border wall with Mexico among other plans.

The Coast Guard is part of Homeland Security, one of several departments that have not been funded for the 2019 budget. Congress is expected to consider a $450 billion bill, before stopgap funding expires on Dec. 21, to fund the agencies through the fiscal year that ends next Sept. 30.