The US Coast Guard issued a safety alert to inform operators of the role that the main propulsion lube oil system was found to have played in the El Faro casualty, recommending that operators, especially ship engineers, review the operational procedures and limitations of vital propulsion machinery, and verify compliance with SOLAS, Classification Society and regulatory standards.

El Faro sank along with its 33 crew onboard, in October 2015, marking one of the worst maritime disasters in US history. The USCG official report on the sinking of the El Faro revealed that loss of propulsion during heavy weather was contributing to the sinking. The exact operational status of all vital El Faro engineering equipment prior to the casualty could not be determined, but bridge audio recordings indicate that the vessel lost lube oil pressure to the main propulsion turbine and reduction gear bearings, resulting in loss of propulsion.

It is believed that the vessel’s substantial list, coupled with trim by the bow, caused the main engine lube oil pump to lose suction. A detailed modeling and static analysis of El Faro’s lube oil system determined that a severe inclination of the ship, coupled with a relatively low volume of oil in the sump, would likely result in a loss of pump suction. 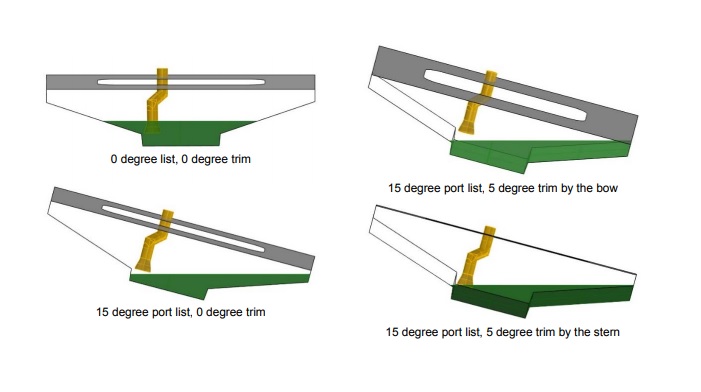 EL FARO’s main engine lubricating oil sump and off-center, aft oil suction bellmouth. Lubricating oil is shown in green. The pump’s ability to maintain suction is affected by vessel list, trim, and motions, and the volume of oil in the sump / Credit: USCG

Although the El Faro’s engineering plant configuration was similar to most steam turbine ships of a similar age, the vast majority of large oceangoing commercial ships currently operating have marine diesel engines as primary source of ship propulsion.

However, failure of a vessel’s lube oil system generally means a loss of propulsion for all types of engineering plants. For a single-turbine ship like El Faro, this type of casualty would result in a total loss of maneuverability until the system can be restored.

Title 46 of the Code of Federal Regulations (46 CFR), Section 58.01-40, requires that propulsion machinery and all auxiliary machinery essential to the propulsion and safety of the vessel (such as the lube oil system) be designed to operate:

SOLAS, Chapter II-1, Regulation 26.6, essentially has the same requirements as 46 CFR 58.01-40. There is no compelling evidence to suggest that US vessels are not in compliance with the above CFR and SOLAS standards. However, given the criticality of propulsion and essential auxiliary machinery, particularly in heavy weather or high-traffic areas, the USCG strongly recommends that: