Above image is used for illustration purpose only

USCG: Conditions of entry for ships from certain countries

In 2009, USCG determined that the Republic of Madagascar was not maintaining effective antiterrorism measures in its ports with the exception of the port of Toamasina (also known as Tamatave). Hence, USCG now issued Port Security Advisory 1-20 naming the countries that are not maintaining effective antiterrorism measures and clarifying exceptions in each case.

Namely, the Coast Guard has determined that ports in the following countries are not maintaining effective antiterrorism measures:

Therefore, all vessels arriving to the US that visited the countries listed above during their last five port calls must take the following actions as a condition of entry into US ports:

2. Ensure that each access point to the ship is guarded and that the guards have total visibility of the
exterior (both landside and waterside) of the vessel. Guards may be:

3. Attempt to execute a Declaration of Security;

4. Log all security actions in the ship’s security records; and

5. Report actions taken to the cognizant USCG Captain of the Port prior to arrival in the US.

Failure to properly implement these actions may result in delay or denial of entry into the United States. 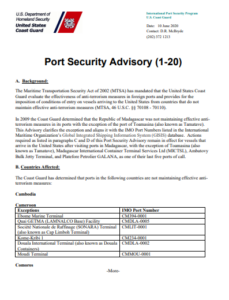