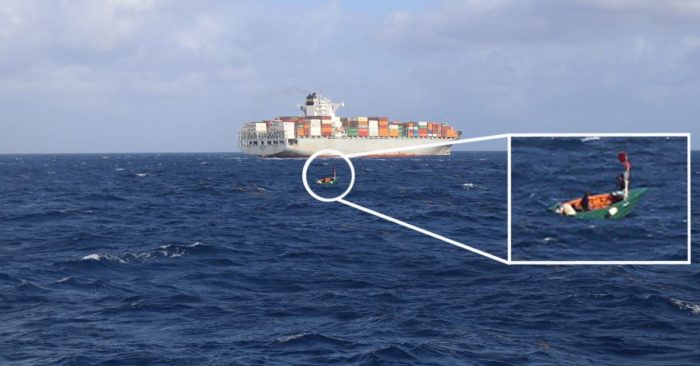 The crew of the US Coast Guard Cutter Donald Horsley along with the Liberian-flagged bulk carrier ship Skiathos rescued three stranded boaters, a man and two women, on June 8, 75 nautical miles south of Puerto Rico. The three were stranded at the Caribbean Sea for 21 days.

The three persons that were rescued claim to be Dominican nationals from the Caribbean island of Dominica. They were stranded at sea for 21 days after their 20-foot boat ‘Papa Fish’ became disabled and adrift on a trip from Dominica to Martinique that started on May 19.

Watchstanders at US Coast Guard Sector San Juan received notification on June 7 from the crew of the 886-foot ‘Skiathos’, reported a boat with three people onboard waving their arms for help.

The crew of a US Customs and Border Protection Caribbean Air & Marine maritime patrol aircraft located the ‘Papa Fish’ and confirmed there were three people onboard.

Once on the scene, the crew of the Donald Horsley rescued the survivors who appeared to be dehydrated and hungry, but in good health. The three were then transported to Ponce, Puerto Rico, where they were  assisted by Customs and Border Protection Office of Field Operations agents in the Port of Ponce.

This is a perfect example of how the crew and captain of the bulk carrier Skiathos kept with the time honored traditions of mariners assisting those in peril at sea. Their ability to stay on-scene until a capable surface asset arrived to enact the rescue was nothing short of heroic.