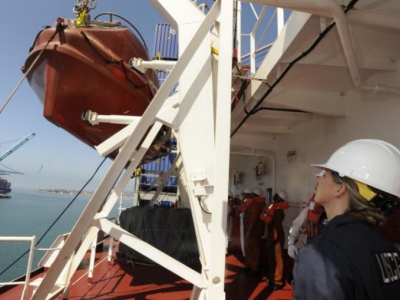 Key statistics for Port State Control in the US

The United States Coast Guard (USCG) released its final Port State Control (PSC) report for the year 2012.The Annual Report gives details about the PSC activities within the USA during last year and key statistics related toenforcement of the regulations under the InternationalConvention for the Safety of Life at Sea (SOLAS), theInternational Convention for the Prevention of Pollution fromShips (MARPOL), and the International Ship & Port FacilitySecurity (ISPS) Code.

The USCG Annual Report also provides several detailedstatistics showing detailed performance, e. g. for flags, ROs or different types of ships. With regard to the safety performance of foreign vesselsduring 2012, there are mixed results. There was a uptick in thenumber of safety detentions despite the fact that fewer examinations were conducted6%. As a result, the associated annualdetention ratio rose.

“When coupled with the 3% decrease invessel arrivals, I find this result worrisome. Overall, we haveseen the safety-related detention ratio decrease approximately 80% since the calculation of ourfirst detention ratio in 1995. I am concerned that the 2012 detention ratio may be a leadingindicator of the degradation of vessel systems, a result of deferred preventative maintenance andthe financial environment. I hope that this is not the case and that these statistics are just ananomaly.”

Joseph A. Servidio adds “With regard to maritime security compliance, we have seen sharp decreases in thenumber of ISPS-related major control actions (MCAs) in recent years culminating in the smallestnumber of MCAs and the lowest control action ratio ever. I hope that vessel owners andoperators remain committed to meeting required compliance standards, relating to both safetyand security items. We will monitor 2013 statistics and determine if additional Port Statemeasures or Port State Control Officer vigilance will be required during examinations.”

Flag Administration safety performance for 2012 slightly decreased from the previous year, with theoverall annual detention rate increasing from 1.04% to 1.17%. However, the 3-year rolling detentionratio dropped from 1.53% to 1.30%; this represents the lowest three year safety detention ratio that has ever been recorded. The Flag Administrations of Belize, Cook Islands, Curacao, Gibraltar, Saint Kitts andNevis, Turkey and Venezuela were all removed from Targeted Flag List. Also is is noted that five newFlag Administrations are potentially qualified for USCG QUALSHIP 21 Program and their vessels will beentered into the program, contingent upon the Administration and the vessels meeting other requiredcriteria. Those five Administrations are Bermuda, Gibraltar, India, Portugal and the Republic of Korea.

The enforcement of the North American Emission Control Area began on August 1, 2012. All vesselsare required to use fuels with a sulfur content of less than 1.0% within 200 miles of the designatedspecific portions of U.S., Canadian and French waters. Despite significant outreach efforts to publicizethe entry into force of the associated requirements, Coast Guard has found instances of vessel personnel that areunaware of them. More than one hundred deficiencies have been issued to vessels with one egregiouscase resulting in detention. The U.S. Government has worked closely with owners/operators to developworkable implementation strategies and will continue these efforts. Additional information on thissubject, including contact information for questions, can be found on the U.S. Environmental ProtectionAgency’s website.

The U.S. Coast Guard promulgated CG-CVC Policy Letter 12-08 on October 15, 2012, containing guidance for enforcement of the provisions of the International Convention on the Control of HarmfulAnti-Fouling Systems on Ships. Enforcement regime on November 21 was initiated, 2012 and havesince found a high level of compliance with the requirements of the convention. Additional informationon this U.S. implementation of this convention, including the referenced policy letter, can be found on Homeport website under the Environmental mission.