The USCG has issued a Safety Alert on the dangers of confined space entry , in light of a recent casualty where three people were asphyxiated on a drilling rig (MODU). The Coast Guard says that Studies have shown that people often miss the obvious cues of a situation while under stress and because their focus is upon another effort or action that needs to be accomplished. Several sources indicate that over 50% of the workers in enclosed / confined spaces die while attempting to rescue their coworkers.

Concerning the incident, 10 crewmembers were on board the MODU preparing it for a heavy lift transport to an overseas ship breaking facility.

They were successful in dewatering three of the MODU’s four legs. Yet, the de-ballasting system was inoperable in the fourth leg because piping and valves had been previously removed. To continue pumping, the crew rigged a portable diesel engine driven pump to discharge the tanks.

Each leg had six decks. The first two uppermost decks had access hatches that allowed easy transfer of crew and equipment between the decks. The remaining decks were accessed via manhole hatches that were too small to allow passage of the portable pump and had to be enlarged. As each ballast tank was fully discharged, the manhole cover at the bottom of the tank was enlarged and the pump was lowered.

Once they reached the lowermost ballast tank, the pump was set up with its suction hose in the tank and discharge hose exiting the leg via a hole torched through its side shell plating. A second smaller hole was also cut to serve as an air supply vent.

Seven of the crew onboard were involved in the dewatering operation and this casualty.

They were experienced mariners, but lacked MODU experience.

The Superintendent, Captain, Rigging Master, Fitter, and an AB (AB2) were on a dinner break while another AB (AB1) and the Electrician were assigned to oversee the dewatering operation. Without notifying anyone, AB1 descended into the leg presumably to check the pump. The Electrician became concerned when he failed to see AB1 on deck and descended into the leg himself, only to find AB1 collapsed and unconscious near the pump. Although nearly overcome by the exhaust fumes himself, he was able to safely escape.

Once on deck, the Electrician notified AB2 and the Fitter about AB1’s collapse. AB2 then descended to assist AB1 while the Fitter went to notify the Captain. The Captain, Ship Superintendent and Fitter then, notably, and without safety equipment, descended into the leg to assist AB1. Upon entering the upper part of the MODU’s leg, they noticed AB2 had collapsed and was now unconscious one level above AB1.

At that time, the Fitter was overcome by the vapors and collapsed next to AB2. The Captain and Ship Superintendent then managed to escape the leg with assistance from the Rigging Master who had entered the leg with a Self-Contained Breathing Apparatus (SCBA) brought onboard from another vessel. In the end, AB1, AB2 and the Fitter died, while the Captain and Ship Superintendent were airlifted to a hospital and survived.

The investigators were concerned, due to the fact that the Captain decided to enter the space with two other people without personal protective gear and a SCBA.

Therefore, in light of this incident,the Coast Guard strongly encourages all who work or may be employed onboard vessels in any role, whether they be senior shipboard officers or crew, riding
crew, shore side managers, owners/operators, and other personnel to:

For more information on the safety alert, you may click on the PDF herebelow 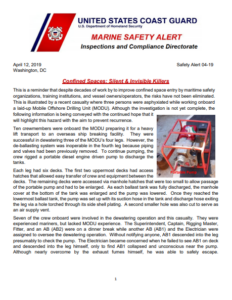