by The Editorial Team
in Loss Prevention, PSC Focus

During an inspection by the Marine Safety Detachment Port Canaveral Port State Control Officers, there were MARPOL deficiencies identified, related to the 15-ppm Bilge Alarm system of the Oily Water Separators (OWS) onboard four separate ships.

Specifically, the PSCOs discovered that the entries in the Oil Record Book (ORB) weren’t compliant to the Bilge Alarm Data being displayed by the bilge alarm, or also known as oil content meter. 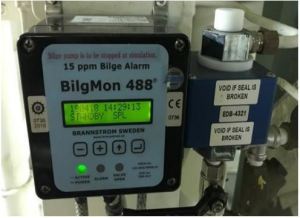 Concerning the Bilge Alarm Data, it is required to record:

Moreover, the device is required to store the data for minimum of eight months, so that data is displayed or printed in a protocol for official system inspections as required by IMO Resolution MEPC.107(49)

In each case, the PSCOs issued a deficiency on the Port State Control Report of Inspection (Form B) requiring that each vessel needed to verify the validity of the entries in the Bilge Alarm data log against the entries in the ORB. Thus, the deficiencies were to be rectified to the satisfaction of Recognized Organization, Flag Administration, and the U.S. Coast Guard prior to the vessels’ departure from port.

Moreover, the monitor in this cases was the BilgMon 488 – as shown above –  model manufactured by Brannstrom, a Swedish company. The older model – see down below –  has a battery that is not replaceable by the crew inserted behind the circuit board of the Bilge Alarm. 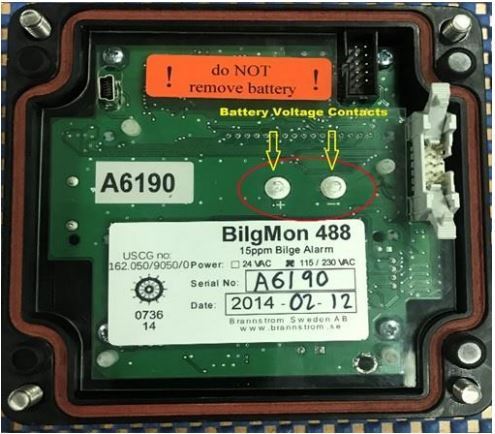 As a result, when the data was viewed on the LCD screen it was scrambled and inaccurate.

According to the operators manual: under no circumstances should the battery be removed.

In light of the above, removing the battery may lead to an unrecoverable error, failure or data loss.

In the meantime, the newer model of Bilgmon 488, has a removable battery – as shown with the yellow arrow below -. Consequently, when the battery is ‘dead’ the cremembers can safely remove it. 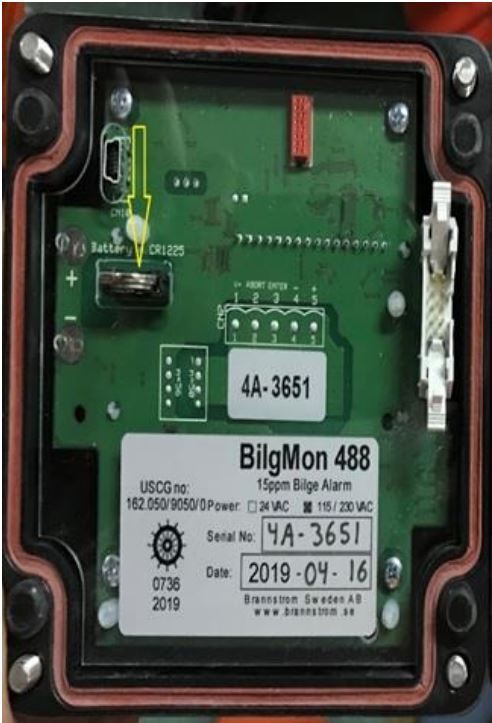 Concluding, due to the discoveries above, the USCG recommends that ship owners and operators whose vessels use the BilgMon 488 to: 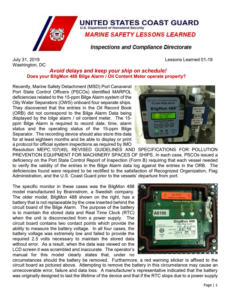