The US Office of Navigation Systems released Marine Safety Information Bulletin 002-19, 'Parasailing - Navigation Rules and Flight Safety,' to address operations of vessels pulling parasail wings and to promote the safety of passengers aloft in the vicinity of aircraft.

Parasailing is an 'activity in which an individual is transported or carried aloft by a parachute, sail, or other material attached to a towline which is towed by a vessel.' The vessel’s movement creates the lift to keep the parasail wing aloft.

This activity involves two areas of risk particular to this specialized industry:

This MSIB addresses Navigation Rules regarding the operations of the ship pulling the parasail wing and provides information to promote safety while operating with passengers aloft in the vicinity of aircraft that may or may not be towing banners.

The vessel operator is responsible for the ship’s safe navigation and compliance to the Navigation Rules. Generally speaking, the vessels pulling a parasail are highly maneuverable. This however, does not prevent the operator from determining and declaring their status as restricted in the ability to maneuver.

If the vessel pulling the parasail wing does not display the lights or shapes prescribed in Rule 27 (Vessels Not Under Command or Restricted in Their Ability to Maneuver), then it has no special conditions or consideration, as it operates as a power driven vessel underway per Rule 18 (Responsibility Between Vessels).

In addition, Rule 6 (Safe Speed) always applies. A vessel operator should consider traffic density when determining if it is safe to carry out parasailing operations. He or she should be aware of the maneuvering characteristics of the vessel when persons are aloft, including minimum safe stopping distance and turning radius.

You may see more details in the PDF below 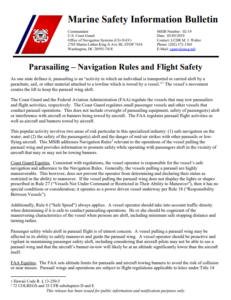